While running for the Republican nomination, future U.S. President Ronald Reagan flew into Wheeling on May 3, 1976, to speak before a crowd at the Field House at Wheeling Jesuit University. The photograph below was taken by Margaret Brennan at the Wheeling-Ohio County Airport shortly after Reagan's plane landed.

But Underwood said his appearance at Reagan’s first campaign stop in the state should not be considered an endorsement of the candidate.

“It is just a courtesy. I am still running as an uncommitted delegate to the (Republican National) Convention,’’ Underwood said. But if Underwood was uncommitted at Monday’s airport welcome to the former California governor ...about 125 persons who braved 29-degree temperatures weren’t.

They were Reagan supporters who welcomed their candidate with whoops and cheers and numerous requests for autographs. What they lacked in numbers they made up for in enthusiasm, according to a Reagan campaign aide who shivered through the lengthy autograph session.

...If the crowd was happy by Reagan’s “pressing the flesh" at the airport, some members of the news media were unhappy over the barely three minutes allotted for questions of the candidate. Their ire may have been increased by the chilling winds which belied the date of May 3.

Among those evidently surprised at the chilling temperatures were Reagan staffers and members of the Secret Service phalanx protecting the candidate.

According to one staffer, it was warm and pleasant in Indiana, where the entourage had started their day by campaigning for votes in today's Indiana primary. "We dressed for May ...are you sure it is May here in West Virginia?" the staffer asked.

...Reagan met with Underwood prior to meeting with the press. He also shook hands at the airport with his campaign chief in the state, Sen. Judith Herndon, and Wheeling City Councilmen Clyde Thomas and Vern Spohn.

Mayor John E. Fahey also was present for the airport appearance. Fahey came without the traditional key to the city. When asked what he would present to the candidate, Fahey flourished a cigar and asked, "will this do?"

In other notes on the Reagan visit to Wheeling:
-During the entire visit, including the Wheeling College Fieldhouse speech, Reagan never once referred specifically to being in Wheeling. His only reference to West Virginia came in response to a newsman's question.

➤ Read the Intelligencer's full coverage of Reagan's 1976 visit to Wheeling 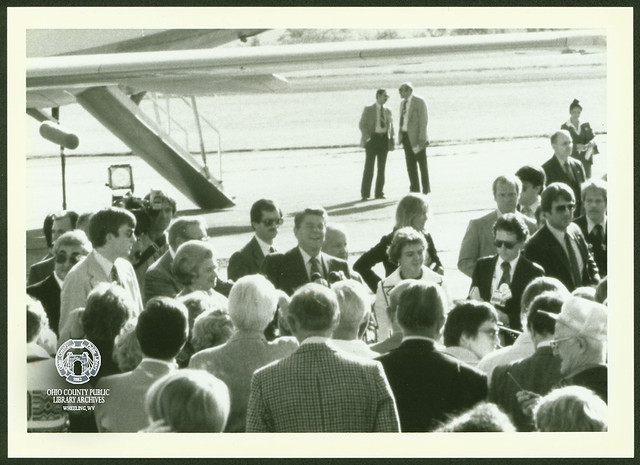