DESCRIPTION OF THE BUILDING

Which is Undoubtedly the Finest of the Lot in Wheeling — Every Possible Arrangement for the Comfort of the Scholars — Heating and Ventilation — Dedicatory Exercises Held by the Teachers Yesterday.

Webster district's new public school building is now practically completed and yesterday afternoon impromptu dedicatory exercises were held under the auspices of the teachers' association, described elsewhere in this column. The building is undoubtedly the finest of the nine structures in Wheeling and as such is worthy of at least a short description. Yesterday afternoon an Intelligencer man was shown through the building by Mr. J. H. Giesey, of Franzheim, Geisey & Faris, the architects who designed and under whose supervision the building was erected. The designer of the building was Mr. M. F. Giesey, who holds the position of architect for the board of education and the Webster building will be a substantial tribute to his talent.

For a long time the Webster commissioners made a hot fight for a new building, their demands being for a twenty room structure. At last the board of education consented to the demand, partially, specifying that the new building should be a twelve-roomed edifice. This was completed some time ago. While the new building was going up the Webster members of the board of education, Messrs. Medick, H. Menkemeller and Weidner, did not give up the battle for a larger building, something which they claim was necessary. Last spring they succeeded in getting the board to provide for an addition, eight rooms, to the new building and work was at once started. It is the completed new building that is presented in the accompanying cut.

The building is of red pressed brick with stone trimmings, and a very imposing central tower adds to the handsome exterior. The style of architecture is mixed, no particular school of designing claiming predominance, and the combination makes a beautiful whole. It is of two stories with a basement, principal's office and twenty school rooms, ten on each floor. One of the best of many good features of the building is the easy manner of quickly getting out in case of a fire or other emergency -- there are five exits and four large stairways, each twenty feet wide. The entrances at the front are at each side of the tower, and in addition one is placed at each end of the building, while another forms an exit at the rear. On both the first and second floors there are two large central halls running the full length of the building, 220 feet, and twelve feet in width.

The heating and ventilating apparatus is of the most approved and latest patterns, the Peck-Williamson system. In the basement there are ten heaters amply enough to maintain a temperature of seventy degrees in all of the twenty rooms if desirable. An ingenious arrangement of the apartments in the basement allows the heaters to take in nothing but pure air brought from outside the building, while a system of ventilating bases placed in all the rooms takes all impure air from the rooms and sends it up through a large independent stack built for this purpose, the draft being created at the bottom by an ordinary burnside stove. By this arrangement the air in any room is entirely changed every fifteen minutes, insuring the entire purity of the air in even a crowded room.

The various rooms are unusually well lighted and the arrangement of the seats is good, the scholar receiving the light from the left. The blackboards are indestructible, build in the walls. The grammar room is the largest apartment and is provided with a stage, and will seat over 100. A small class room at one side is used occasionally as a dressing room when entertainments are being held. The apartments of the janitor, Jerry Lehew, are in the basement at the south end, convenient to his work. Altogether Webster has a building of which the district may well be proud.

The accompanying engraving of the new building was made by an attache of the firm of Franzheim, Giesey & Faris. 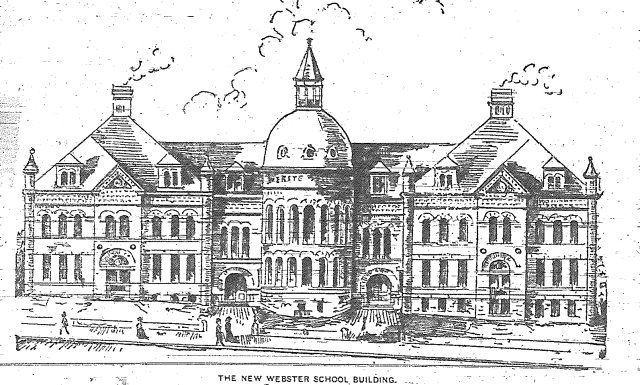 Gives an Impromptu Dedication at the New Webster School Building.

The Wheeling Teachers' Association held its regular meeting yesterday afternoon in the grammar room of the new Webster school building and the exercises were somewhat of the nature of a dedication, though no special programme to this end had been prepared for the occasion.

The meeting was called to order by city superintendent of schools, W. H. Anderson, promptly at 3 o'clock. Professor A. M. Stevenson led in the Lord's prayer. A song, "The Revel of The Leaves," was sung by pupils of the school under the direction of Miss Lucy Robinson, musical director of the city schools. The song was greatly enjoyed. A paper was read by Miss Fannie Stanton, of Centre school, subject, "That Tired Feeling." The paper was spicy, well prepared, well read and was well received by all who heard it.

Rev. Dr. Bonheim was then introduced by Superintendent Anderson and he read a paper on the subject "Our Public Schools." After speaking of the honor of being permitted to speak to the teachers of Wheeling, he discussed the subject very forcibly. First he spoke of the teacher, his duty and moral obligation. The true teacher, like the poet, is born, not made. He spoke of the many qualifications the teacher should possess. But few have them all, but now and then there is one such as Froebel, Pestalozzi and Arnold of Rugby who has them all; they make their mark on society. The teacher in forming our national character ranks higher than the political leaders. It is necessary that the schools should be public schools in the truest sense of the word. They should have the moral as well as the financial support of the public. They should be purely secular, not sectarian in any sense whatever. The schools are for all the people, and hence they should be under entirely secular influence. We find, said Mr. Bonnheim, in our public schools the true foundation of our country's democracy. The rich and the poor here meet together, and the two classes are thus brought to know and to appreciate each other better. He closed with a glowing tribute to the enterprise that would erect such a grand building.

Miss Zoe Hastings gave a selection entitled "Celeste" in her own inimitable way. She was loudly applauded. Dr. Ulrich, the newly elected president of the school board, was called on and gave one of his very best talks. He promised to do all in his power, as president of the board, to improve the Wheeling schools. The meeting was one of the most profitable and enjoyable in the history of the teachers' association.