The New Packet Virginia Gets a Fine Reception Here.

With People when the New River Queen Arrived –Thousands Inspected the Boat, Incidents of the Trip from Huntington Up – Parkersburg Gives a Hearty Reception – A Crown Cityman's Far-Famed Appetite – Social Features of the Trip Other Happenings En Route.

That the new Pittsburgh and Cincinnati liner, Virginia, the proper will be a favorite succeeding the ill-fated Iron Queen in that respect, was amply proved Tuesday and Wednesday. Portsmouth and Ironton, Ohio and Ashland and Catlettsburg, Ky., gave the new boat successive ovations, but it remained for the first important river town in West Virginia, Huntington, the “Second City,” to warm the cockles of the veteran Calhoun's heart by giving her a reception that eclipsed anything seen in Kentucky or Ohio towns. The boat arrived at Huntington at 8 o'clock Tuesday night and when a mile below the first salute was given from a cannon that made noise galore and kicked fifty feet every time it was fired. Two thousand people gathered on the wharf and inspected the new packet when she swung in. Notwithstanding the fact that the West Virginia town has a fine system of street paving, it required a dozen cabin boys and an hour's time to clean the main cabin when the Huntingtonians had departed. As the Virginia straightened up the river she was given a parting shout that reminded old-timers of the 'fall of ninety-two' when Parson“Charley” Caldwell was opposing “Farmer” Capehart for Congress. Bearing the name she does it was especially fitting that a West Virginia town should outdo itself in its salute to the new queen of La Belle Riviere. At Huntington, by the way, the Virginia fired her six-pounder for the first time. Like the Huntington _______ it is a _______ for noise. 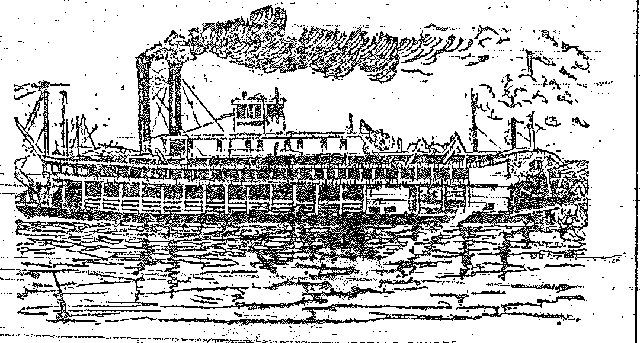 At the several smaller towns above Huntington that were passed during the night large and noisy crowds were, as a political scribe so aptly puts it, “largely in evidence.” Everywhere, West Virginians take pride in the fact that the finest steamboat in the upper river has received a name that applies to the war-born commonwealth.

By the way, it was the western state of Virginia that was in view when the new boat was named and the handle – West – was dropped simply because its addition to the name made it somewhat unhandy. Captain Ellison, superintendent of the packet line, who is making the trip up the river, tells how the boat received its name. Captains Henderson, Calhoun and Ellison met in Cincinnati last spring to complete arrangements for the proposed addition to the packet fleet, and among other matters, were to settle on a name. Messrs. Henderson and Calhoun were of the opinion that Allegheny the proper just thing, while Captain Ellison ably championed the cause of Virginia. An all-day's session ended with the boat a nameless creation. Just as the board of directors was about to adjourn, Mr. Ellison proposed that the matter should be settled by the toss of a penny. “Heads” won and Ellison's choice “went.” Had the penny flopped “tails” the Allegheny would now becoming up the river and the Virginia nothing but a desire unfulfilled. Seeing which, all Virginians should adhere to “heads” in future transactions with coppers.

During the night, Point Pleasant and Gallipolis were passed, but so far advanced in the wee sma' hours that nobody but a sleepy wharfman or two showed front. Wednesday morning Middleport and Pomeroy gave the Virginia effusive receptions. As usual the cannon boomed and the mobs played havoc with the cabin. Ravenswood was another West Virginia town that didn't do the thing by halves. Half of Jackson county turned out and the town had a circus day appearance. The several smaller towns between Ravenswood and Parkersburg also did themselves proud. At Parkersburg, a magnificent reception was given the boat.

At Parkersburg, the “Thursday Club,” of Sistersville, came aboard, under the chaperonage of Colonel Clint Moore. There was a gay party and soon had the main cabin cleared and took to the festive dance. At Marietta, another Sistersville social organization, the “Twentieth Century Club,” came aboard and added to the festivity of the evening. These two clubs, by the way, represent two sections of social life in the hustling oil town. The “Thursdays” are composed of newcomers, while the other is made up of people native to the soil. Each claims to occupy the premier position and represent the “beau monde” of the place. Certain it is that both are full of very agreeable people.

Yesterday morning found the Virginia above Sistersville. At Clarington, Powhatan and Moundsville large crowds welcomed her, while Bellaire turned out almost en masse. But it was at Wheeling that one of the largest crowds seen along the river turned out. Just as the new boat whistled, when opposite the Belmont Iron Works, the several boats in the harbor, including the Lexington, Liberty and Charleston, united in a steam whistle salute that was noisy enough to suit anybody. The Virginia responded with a whistle and cannon. The racket attracted a great crowd to the river front, who took advantage of the opportunity to inspect the boat. As has been true elsewhere on the river, nothing but words of praise were heard. During the hour, 10 to 11 a. m., while the Virginia was here, she was crowded with people. A delegation of Pittsburghers came aboard to make the trip to the Smoky City. Captains Ellison and Calhoun were greatly pleased with the reception accorded the packet here.

On a steamboat, an appetite invariably is in good working order. There seems to be something in the air and surroundings that sends the worst dyspeptic aboard to the dinner table. It may not be a profitable or altogether desirable feature from the packet man's point of view, but 'tis a fact. Some of the boys were telling “grubb stories” and Captain Ellison contributed the premier one of the lot. Several years ago he was monarch of all he surveyed on the Hudson. Once coming up the river, a representative of the Buckeye state boarded the boat at Crown City. It is alleged he carried a big satchel labeled “Appetite,” but this is not verified by Captain Ellison. Breakfast was served shortly after the Crown City man came aboard and here is where the man appeared to advantage. That was a great year for steaks and the way the new passenger called and re-called for meat was truly great. When the ninth order had been served, the steward became alarmed, the boat's larder showing signs of exhaustion. A refusal to bring on another steak surprised and angered the “C. C.” man, who forthwith kicked to the captain. That officer was not at all sympathetic and told him to take some other boat in the future. This story was being told as the Virginia was at Crown City. A six-footer, who had come on board to inspect the boat, was an attentive listener. He leaned over and said to Captain Ellison:

“Say, Cap., it was the eleventh steak that brought on the fuss.”

Tableau – He was the man.

Among the passengers on the Virginia's initial trip were the following: Captain Cofflin, of Cincinnati, general manager of Marine Railway company, builders of the Virginia; Captain Wednt, of Cincinnati, who is watching the performance of the machinery; Edgar E. Helm, river editor of the Cincinnati Commercial Gazette; John Wier, of the Cincinnati Tribune; Allan B. Smith, of the Wheeling News, and others. These and other passengers on New Year's day organized an association that will make the Wheeling Kickapoos look closely for future supremacy. It is called the Ohio River Connenvataurs, and in generations to come its members will tell of the ordeal through which they passed in order to become full-fledged Connenvataurs. Its object, did you say? Well, if it has one, nobody has discovered it. Captain Sam Cofflin is the presiding genius, ably assisted by Captain Wendt as prong artist – he handles all candidates on their journey over the red-hot-coal route. As general tormentor, another Cincinnatian, Colonel Helm, is of high degree. The home office is to be in Cincinnati and “harbors” are to be located in Pittsburgh and Wheeling. The initiation fee is $1,000 when the candidate refuses to go through the regular work of the order.