Virginia, of the Pittsburgh and Cincinnati Packet Line,

DUE HERE THIS MORNING.

Great Crowds Receive Her at Points Down the Riverwith Greatest Enthusiasm – Judging from Her ___ Performance Sheis Destined to be the Fastest Boat on the Upper Ohio – Gossipon the Levee and General River Intelligence.

ON BOARD STEAMER “VIRGINIA,” HUNTINGTON, W. Va., Dec. 31 – After a day on this magnificent steamboat, the oft made assertion that the Virginia is queen of La Belle Riviere is verified without reservation. She is a floating palace, without any of the objections that apply to some, being comfortable, roomy and convenient, beside giving promise of unusual speed. In addition she is officered by as fine a set of river [illegible]  . . . puffed a Wheeling stogie, which, by the way, remains in undisputed supremacy as the favorite “smoke” of the boys who “go down the river in boats” that sometimes, too, “pass in the night.” 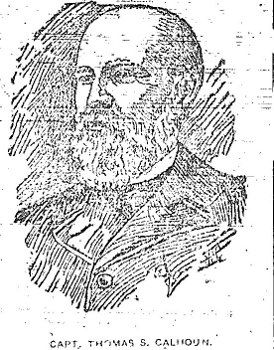 Without being pushed the boat made the first eight miles up the river out of Cincinnati in exactly one hour. It is never the correct thing to put a boat's machinery to even a moderate strain on her first trip, and for this reason no records will be broken. But the way the Virginia comes up the river under a head of steam that sends her big wheel around at the rate of seventeen revolutions a minute, make it practically a certainty that she will knock out theold Iron Queen in speed when her machinery outfit has been thoroughly tested. The Queen had the record for stern-wheelers on the upper river, having covered eleven miles up stream in an even hour.

The Virginia's work last night, eight miles an hour, settles it that she will soon be in shape to over-top the ill-fated Queen in point of speed.

Captain Calhoun is more than pleased with the craftthat he will now command, and the other officers share the samesentiment. Captain J. Frank Ellison, formerly of the Hudson, who isnew superintendent of the line at Cincinnati, is taking the trip upthe river and, like everyone else, is lost in maze of admiration. Itis in the main cabin interior that the packed company has gone itsfull length. Such a river interior has never before been seen of theOhio. Numberless mirrors and at night the multitude of electriclights give to the cabin a brilliancy that challenges the greatestadmiration.

All along the river the Virgina is being given a great reception. At New Richmond, Ohio, two hours above Cincinnati, therewas a big crowd that showed enough enthusiasm for an average political meeting. This morning and afternoon the same has been repeated at Portsmouth, Ironton, Ashland and other points to Huntington.

Special Dispatch to the Intelligencer.

PARKERSBURG, W. Va., Jan. 1 – The Virginia arrived here at ______ this evening. When her 10,000 candle power search light was thrown on the wharf it disclosed a crowd of fully 2,000 people who showed the same enthusiasm manifested at Huntington. In fact it is about a draw between the two towns.