A BRIEF HISTORY OF ST. JOHN'S

The origin of St. John's Church leads back to the year 1835. The records of that time are meager, but such as are available relate that religious services were held by the German pioneers of Wheeling in a frame building located on Main Street. These services, no doubt were held at irregular intervals upon occasions when German pastors made the round of their circuits. However, when in the year 1835, Rev. Andreas Schwartz became the first resident pastor, a congregation was organized, services were held regularly, and the place of meeting was changed from the building on Main Street to the old Ohio County Court House, then located on Tenth Street opposite the present Market House.

As the membership increased, the desire which had existed for some time among the members of the congregation to build a church, could be realized. In the year 1836 property was acquired on Eighteenth Street, and a church was erected in the same year on the site how occupied by the Eighteenth Street chapel of the First Presbyterian Church. The corner stone of this first church bears the inscription, "Erste Deutsche Lutherische Kirche in Wheeling, 1836" (First German Lutheran Church in Wheeling, 1836). This corner stone is still the cherished possession of St. John's Church and is laid in the east wall of the present church building. 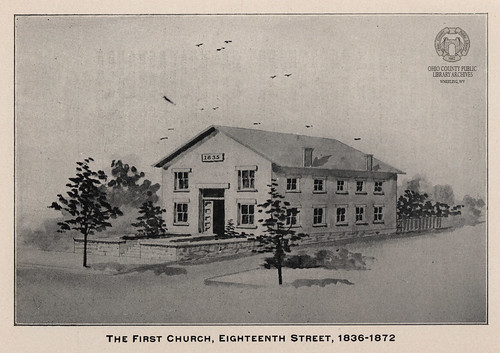 The congregation continued to worship in the church on Eighteenth Street, in East Wheeling, until about the year 1870. At that time a group of German speaking people who had formed a small church organization of their own united with the older organization in East Wheeling. When this merger took place the name of the church was changed to St. John's German Evangelical Protestant Church. Due to the rapid growth of the congregation which followed the merger, a larger church building soon became necessary. A central location for a new church was sought and such a place was found on the corner of Market and Seventeenth Streets where the B. & O. railroad station is now located. The church was dedicated on December 22, 1872. 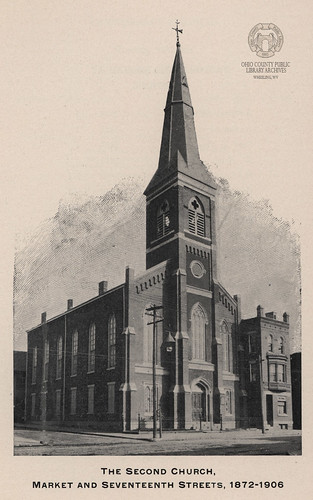 This church served as a place of prayer and worship for St. John's people until the year 1906. In that year the B. & O. railroad purchased the property on which the church stood, together with adjoining property, as a location for its new station. Once more St. John's had to look for a new location. Property was purchased on the corner of Twenty-second and Chapline Streets. Contracts were let, building was immediately begun, and on the 26th of May, 1907, the building had so far progressed that the corner stone could be laid, and on September 20, 1908, the beautiful, dignified and commodious building, our present church, was dedicated to the service and glory of God. 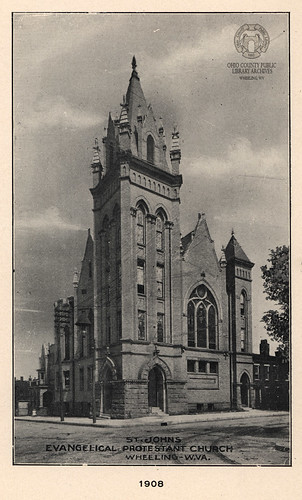 No history of St. John's would be complete without special mention of the signal ministry of Rev. W. G. Ulfert, Ph. D., whose pastorate extended over a period of 39 years, from 1884 to 1923. Under his wise and energetic leadership, the congregation grew in numbers and influence as never before. It was during his ministry that our present stately church was built. His memory will always be cherished by St. John's people and his influence will be felt for generations in the life of our church.

Ninety-five years have passed since that little band of pioneers built their first church in East Wheeling. It is our privilege now to celebrate the 95th anniversary of the founding of our beloved church. The history of St. John's is marked by the love and loyalty, the devotion and faith of its members. With grateful appreciation for the services and sacrifices of the past; with thanks to God for His care and guidance, we look hopefully into the future, certain that He who so richly and abundantly has blessed us in the past, will continue to be with us as we go forward in His name to achieve even greater victories for Him and His Kingdom. With the Psalmist we too can say, "The Lord hath done great things for us; whereof we are glad."