Fourth Street Methodist Church was the first Methodist organization, and also the first church of any denomination to be organized in the city of Wheeling.

The Methodist Episcopal Church of America was organized in Baltimore, December 24, 1784, at the historical "Christmas Conference." Sixty of the sixty-three preachers in America attended this conference which elected Thomas Coke and Francis Asbury as bishops; they appointed Rev. Wilson Lee to the Red Stone Circuit, Baltimore Conference. This was one of the first Methodist circuits west of the Allegheny Mountains. In the spring of 1785, the Rev. Mr. Lee became the organizer and first pastor of the church in the frontier settlement of Wheeling. Only three years before, the last battle of the Revolution had been fought at Fort Henry. It was a wild country which at that time knew no organized religion. Savages and beasts roamed the forests, and the Ohio River was the ribbon that separated East from West.

It was to the home of Colonel Ebenezer Zane that the Rev. Mr. Lee came and made known his mission. He was graciously received, and meetings were later held in this home which stood at the southeast angle of Fort Henry (now Eleventh and Main Streets). Mrs. Elizabeth McColloch Zane, wife of Ebenezer, was the first member of the little Methodist class; she became a power for righteousness and was zealous and pious.

The first episcopal visit to Wheeling was made by Asbury in 1808. Bishop Asbury preached in the courthouse from Hebrews 11-2-3 on "The Great Salvation and the Danger of Neglecting it." The Bishop and his party were entertained at the home of Col. Ebenezer Zane, where his youngest sister, Betty, told of carry powder in her apron to the settlers.

For thirty-three years, from the founding of the church in 1785 to 1818, the congregation had no church building. Meetings were held in the homes until the courthouse was built and then services were held in that structure. By 1818, the membership had grown so fast it was deemed advisable to build a new church. Noah Zane, son of Ebenezer Zane, gave a lot on Fourth St. (the fourth street from the river, now Chapline Street) to John McColloch, Asabel Booth, John List, Jr., Abraham McColloch, Richard Carter and Daniel Zane, as the trustees for the Methodist Episcopal [. . . missing text]

The membership of the charge numbered about thirty persons. On Main Street, between Tenth and Twelfth, there were a few houses, log, frame, and brick. The river bottom was devoted to corn, grass, and woodland. Some distance from the corner of the present Chapline and Twelfth Streets in a northerly direction and near the hill was McConnel's tanyard, his house and farther back a log house. Where the Market House now stands was a pond supplied from a spring in the hillside. Market Street was not graded and had few houses.

In 1823, Fourth Street appeared on the records for the first time as a separate station. In the winter of 1831 and 1832 a most successful revival was held in the charge under Rev. John Newland Moffitt, a noted evangelist, and the membership was greatly increased. At the close of 1832, the membership numbered 273. The old [. . . missing text] 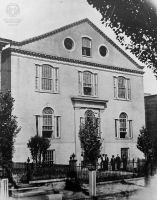 About this time the population of Wheeling was 2,000 and a tremendous effort was required before the ardent Methodists secured enough money to build their new ch. The Rev. William Lambden, Capt. Robert Hamilton, John List, Joseph Morrison, and Elijah Day were appointed as a committee to raise subscriptions and procure materials. Prompt payment was the order of the day in those times, as the subscriptions were made on the terms: one-third in hand, one-third in three months and the other third in six months. Rev. Lambden, Daniel Zane, and Capt. Hamilton were appointed a building committee, with authority to build a structure 60 x 80. Very few of members were persons of means and the struggle to meet the indebtedness of the ch was increased by the financial stress incident to an epidemic of cholera in 1832 and the great financial crisis of 1837. 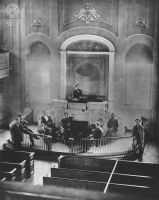 One of the most historic events was the appearance of the noted singer, Jennie Lind in 1851. The famous showman P. T. Barnum was paid $5,000. for this one recital. Seats were sold at auction and Michael Imhoff, a tailor, made the first bid of $250.

In 1839, the need of a Church, merged with Fourth Street.

While repairs were being made on the building in 1866, it was discovered that the walls and the foundation of the church had settled and that it would be necessary to rebuild. During the construction of the new building, services were conducted for 18 months in Washington Hall, "the Birthplace of West Virginia," located at Twelfth and Market Streets where the Laconia Building now stands.

Fourth Street's third church building was dedicated on May 15, 1870, by Bishop Edmund S. Janes; Dr. Henry C. Westwood was the pastor. The design of the building was Norman, distinguished by the presence of the semi-circular arch. A few days after a successful opening, members of the church met to select seats and rent pews, and such was the enthusiasm that a handsome income for current expenses was provided.

Unification of the three major branches of American Methodism occurred in 1939, during the pastorate of Dr. Arthur J. Jackson, and the name of the church was changed to Fourth Street Methodist Church, dropping the word Episcopal.

In 1948, to ease the limited education facilities of the third church building, $30,000 was spent in extensive improvements during the pastorate of James T. Browning. A generous gift by Mrs. Mary Alderman made this work possible and Alderman Chapel was named in her honor.In 1949 serious damage to the building was incurred during the erection of business premises on the adjacent lot to the south. During the ministry of Dr. William Knox, the building was declared unsafe and the congregation worshiped in Clay Junior High School Auditorium from August 20 to October 15, 1950. Several plans were considered to meet this emergency. Finally, by an overwhelming majority of both Quarterly Conference and congregational assembly, the trustees were authorized to purchase the Fidelity Building which was being offered for sale. Erected in 1937, this building not only afforded ample facilities for a modern church program but was readily convertible to ecclesiastical usage. The purchase price was $215,000, including Board Room furnishings, Venetian blinds, some carpeting, draperies, and equipment. Worship services and church school were conducted in the new church home on Sunday, October 22, 1950. Fourth Street Church came into full legal possession of this building on January 1, 1951, and the structure was renamed The Methodist Building. The beautiful Alderman Chapel was installed in a new Alderman Hall in the new building, and the recently purchased kitchen equipment, sinks, and cabinets fitted perfectly into an efficient church kitchen.

Under the wise leadership of Dr. Knox, not only was a new church home secured, but the merger of Central Methodist Church wth Fourth Street was effected. The united congregations held their first service on June 17, 1951.

Since becoming pastor in June 1953, Dr. J. M. Helm has liquidated the remaining debt of $49,000 on the new building. New chancel furniture and pews have been placed in the sanctuary, the parsonage has been remodeled and redecorated, Wheat Youth Center and other rooms of the church have been remodeled and equipped. The mortgage was burned and the new building dedicated by Bishop Lloyd C. Wicke on Easter Sunday, April 21, 1957.

Owned and operated by the Fourth Street Methodist Church, the Methodist Building is valued at more than one million dollars. Over fifty percent of this four-story building is now being used for the program of the church.

Carefully selected limestone, marble and granite have been used in the facings along the lower front entrance. Outstanding from the standpoint of beauty in design is the front lobby with its walls of Tennessee Tavernelle marble set on a base of green Tinos marble from Greece. A paneled effect is achieved by the use of both light and dark marble on all walls of the foyer. Visitors should look closely above the inner lobby door. Visible in the marble are two fossil shells preserved through countless ages from the era of prehistoric sea life. The floor, and that of all corridors, is terrazzo.

The staircase has a specially designed, pressed bronze railing with silver-like Monel metal ships spaced evenly along the hand rail. The green Tion marble is used in the newel post and base borders while Tennessee marble is used for all stairway walls to the third floor. The steps of the stairway are of Roman Travertine, a lighter colored volcanic lava of indestructible hardness. The risers of the staircase are tile blocked off an original Moorish design, executed in blue, cream, and red.

Rare woods — American black walnut, primavera from Guatemala and Central America, and African and Phillippine mahogany — have been used extensively throughout the building. The corridors of the second and third floors are paneled in rich blond mahogany. Wainscoting and doors in the various rooms are of mahogany or walnut.

Along with its beauty, no building could be more complete in its mechanical conveniences. It is air-conditioned throughout the first three floors by a central unit. The passenger elevator is automatically controlled and was the first of its kind in Wheeling. The building has its own incinerator, a hot water tank with a 900-gallon capacity, and a freight elevator. The two gas boilers are able to heat the entire building without the aid of the other. A general plan of sound-proofing has been used, with all corridor ceilings made of acoustic plaster. Special cork tile is used to cover 17,000 square feet of the floor area. Many other rooms are carpeted.

Designed by the late Rowland M. Johnson, one of the nation's outstanding architects the Methodist Building was completed in 1938. Mr. Johnson also designed Commencement Hall at Bethany College. The George A. Fuller Company nationally famous for their construction work built the Methodist Building and they regard this as one of the most complete and artistic structures of its size that they have ever erected. The most beautiful buildings in the nation's capital have been constructed by Fuller Company including Lincoln Memorial, Arlington Memorial, and the U. S. Supreme Court building. This was the second building that the Fuller Company built in West Virginia, the first being the state capitol in Charleston.