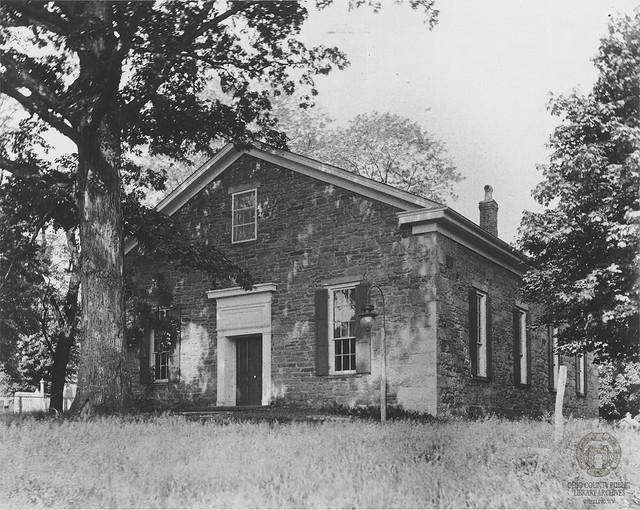 - from The Old Stone Church, a 120th-anniversary booklet produced by the church in 1907.

(Explanatory Note. — For information given in this article, the writer is indebted to Histories of Washington and Redstone Presbyteries; an article written by Prof. John Hervey, in 1876, and to interviews with aged members of the church.)

In 1787, the same year in which the convention that framed our National Constitution sat in Philadelphia and in which the unbroken wilderness lying northwest of the Ohio river, was organized into the great Northwest Territory, the "Forks of Wheeling" commonly known as "The Old Stone Church" was organized, one year prior to the organization of "The General Assembly of the Presbyterian Church of the United States of America."

This church, with West Alexander — formerly known as "Three Ridges" — and West Liberty, are known as the eldest church organizations in this community, and like West Alexander has the unusual record of being only in the fifth pastorate after so long a time. During the century and two decades of her history the church as an organization has seen the territorial lines of the Synod, with the church she has been connected, changed seven times and that of the Presbytery four times.

The early pioneers gathered from their cabins in the wilderness, first as a congregation, to worship God, under the wide spreading branches of the venerable oak tree still standing in front of the "Old Stone Church," and here, seated on rudely constructed seats, they listened, perhaps, to the first public proclamations of the Gospel as it broke the silence of the preceding ages from the lips of Rev. John Brice, who received his theological training from Rev. Joseph Smith of Upper Buffalo - the Rev. Smith of New Orleans flour fame.

Those were the days when it required bravery as well as piety to meet in holy convocation, when Bibles and Psalm books were for devotion and rifles for protection. An old congregational minute book gives this record: "Ohio County no sooner began to be settled than the settlers provided for themselves a place of public worship obtained the preached gospel even in perilous times, receiving the Spiritual Bread with the weapons of defense in their hands to protect themselves from a ruthless savage."

Rev. Brice was frequently escorted from West Alexander to Elm Grove by armed men of his congregation and as they assembled for worship, at first in the woods and later in a church building, it was with stacked arms and sentries to guard that they listened to the Word preached, but what a change has occurred during the last six score years of the life of that stately old oak that towers above the entrance of that historic edifice, "The Stone Church?" It has afforded peaceful shade for the babe as the anxious mother tarries for a moment, bearing it to be dedicated to God in baptism to the church within, and after a long life of usefulness as friends bear the tenantless body of the loved one to the cemetery beyond, its rustling eaves suggest the moving of angel wings as they bear the spirit to God who gave it. Men have come and gone and still it grows in strength and beauty.

Soon after the organization, Mr. Brice was called as pastor and divided his labors between Forks of Wheeling and Three Ridges - now West Alexander - and continued as pastor over both fields until his death.

Rev. Joseph Stevenson was ordained and installed pastor of the united charge in June, 1809. In 1812, Three Ridges asked for all of Mr. Stevenson's time and Presbytery released him from Forks of Wheeling.

Just at this time James Hervey was licensed and began preaching in this, his ministerial life-ling charge. His ordination and installation took place in 1814. An extract from minutes of Ohio Presbytery reads: "The Presbytery of Ohio being met at the Forks of Wheeling, on the 20th day of April, 1814, did with fasting and prayer and the laying on of the hands of the Presbytery ordain Mr. James Hervey to the office of the Gospel ministry and installed him pastor of the united congregations of Wheeling Town and Forks of Wheeling.

This pastoral relation continued until 1829, when Mr. Hervey resigned the charge to the church at Wheeling and gave three-fourths of his time to Forks of Wheeling, the other fourth being given to a new organization he had effected at Dallas.

In 1839, Dr. McClusky presided at a congregational meeting of Forks of Wheeling church and a call was given for the pastoral services of Mr. Hervey for all his time. This relation continued until the death of Dr. Hervey, which occurred September 13th, 1859, making a continued pastorate of more than 47 years.

The sessional records of the First Church of Wheeling contain the following extract: "The first regular preaching by any Christian denomination in Wheeling, then a small village, was commenced by Rev. James Hervey, a Presbyterian minister, about the close of the year 1812. He had just been located at Forks of Wheeling Creek and finding some of his members residing in Wheeling, and as no public means of grace were enjoyed in the place, he at once instituted preaching there. A small house on the corner of Market Alley and sometimes the Court House were occupied as places of meeting.

Dr. Hervey rode on horseback to Wheeling, performed the office of janitor, rang a dinner bell for services and preached the Gospel. After a long life of usefulness his body was laid to rest in "Stone Church Cemetery," where one by one his sons and daughters, all excepting one have followed him. Mr. Henry Hervey, a son, is still a member of the church where his father labored so long.

UnderDr. Hervey's leadership this congregation took an advanced position in the temperance cause, the fact is mentioned that Dr. Hervey had the first "barn raising" west of the Alleghanies that was accomplished without the use of whiskey.

Under the moderatorship of Rev. David Hervey, of Brook County, a congregational meeting was held and called Rev. Laverty Grier, of East Springfield, Ohio, which he accepted and commenced his work January, 1861, and continued to labor most acceptably in this church, preaching God's Word with conviction and earnestness for thirty-six years, when, on account of infirmities of age, he resigned in 1897, and was succeeded by Rev. W. E. Allen, of Frankfort Springs, Pa., whose pastoral relation with this church still continues, the last three pastorates covering a period of ninety-five years.

Rev. Laverty Grier died in Pittsburgh, Pa., at the home of his son, April 29th, 1907, and was brought back to the "Old Stone Church" where impressive ceremonies were held, after which he was laid to rest in the cemetery, there to mingle his dust with that of the congregation gone before, but his spirit joined with other celestial spirits in the heavenly congregation. Mr. Grier was a man of strong conviction to which he was always true. He was conscientious preacher and faithful pastor.

The bounds of the congregation in 1820 were very extensive, embracing the City of Wheeling, the territory of what is now West Union, Wolf Run, Allen Grove and Limestone, so that from this church have grown nine other congregations.

Isabelle Hervey, a daughter of Dr. Hervey, became the wife of Rev. James Flanagan, D. D. of Grafton, W. Va. She was the first president of the West Virginia Synodical Society and for many years closely associated with the missionary work of the State. Her recent death brought grief to her many friends. Her body was brought back and laid to rest in the family vault in Stone Church cemetery.

The date of the organization of the Sabbath School is not definitely known as all church records previous to 1849 were burned with the home of Dr. Hervey.

Mr. John Thornburg, punctually and faithfully, served as superintendent for nineteen years and his knowledge of the school extends back over a period of sixty years. He gave up his position as superintendent the past year, leaving it largely increased in membership and well equipped in organization. At present the Sabbath School is in a flourishing condition, well organized, with Mr. G. B. Bushon as superintendent. There is a primary department, a home department of seventy members and a cradle roll.

The Bessie Shaw Mission Band celebrated its thirtieth anniversary in connection with the 120th Anniversary of the church.

The Excelsior Band is the only boy's mission band in Wheeling Presbytery. Boys who were members of it, in its early organization, are now leading men in the business life of Wheeling and elsewhere.

The Carother's Mission Band has long done good work and is under the efficient guidance of the Misses Atkinson.

The Senior Christian Endeavor Society was organized thirteen years ago and is doing good work. A Junior Endeavor is well attended and a good interest maintained.

Many changes have taken place since this church was organized as a pioneer church in the forest. The National Road came with its attendant prosperity. From worshipping 'neath the forest tree the congregation went to a tent; next, a log church was erected; then a stone church, which was afterwards torn down and the same stones used in the present building.

The church grounds are a part of the Shepard estate and belonged to what is now known as "Monument Place," and were a gift to the church.

Stone Church Manse, at Cecil Place, with its beautiful grounds, was willed to the church by Mrs. Mary Woods, according to a request made by her brother. The manse was built by the congregation in 1898.

In the early days, the Larger and Shorter Catechism were in every home. The pastor made a tour of the homes and catechized the children.

People came to church in crowds. Four days were given up to communion services. Tokens were permits to the Lord's table and communicants surrounded tables to receive the sacred emblems.

Those were days of plain Bible doctrine.