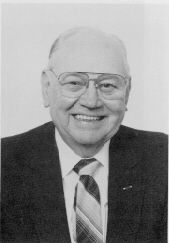 "As a ball-handler, Bernie Mehen was ahead of his time. He was a marvel. He could fake players right out of their shoes. There just wasn't anything he couldn't do with the basketball. He and his brother, Dick, were the greatest players I ever coached." — Everett Brinkman, a member of the Wheeling Hall of Fame and the West Virginia Sports Hall of Fame.

Bernard "Bernie" Mehen is a legendary figure in the history of basketball at old Wheeling High School. He played on two state championship teams — in 1936 and '38 — and was outstanding as a scorer, rebounder, and ball-handler.

Brother Dick Mehen followed Bernie to Tennessee but his career there was interrupted by service in the air force in World War II. Bernie was a second lieutenant in the infantry during the war and saw action in France, Belgium, and Holland before his left heel was shattered by an artillery shell at Aachen, Germany.

Sent back to Camp Blanding, Fla., Mehen was convalescing slowly but one day decided to take his cane and limp over to the post gymnasium. The first trip was extremely painful but he persevered. Eventually, he was able to join the Blanding team, even though he could not leap off his left foot at all.