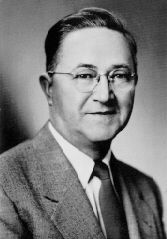 The progress of education in the public schools of Ohio County parallels the career of Levering C. Bonar.He started teaching in a one-room school and worked his way up through the ranks. Ultimately, his years of experience were put to use as superintendent of Ohio County Schools.

Born October 1, 1896, the son of David and Catherine Virginia Parsons Bonar, he attended rural schools in Marshall County, spent his high school years at West Liberty State Normal, received his bachelor's degree from Marshall College, and his master's degree from the University of Pittsburgh.

His first job was at Meighen School on Fish Creek in Marshall County in 1914. He began with 29 students in eight grades and later became head man in a system with 9,282 students.

His master's thesis in college was "A Study of School Buildings in Ohio County, West Virginia," and he always had a deep concern about the facilities and the curriculum of the public schools - as well as the students who learned and the teachers who taught.

A World War I army veteran, Mr. Bonar also served as mayor at Valley Grove. He died in 1978 after having seen Ohio County schools make tremendous strides and much of what he had envisioned finally being realized.