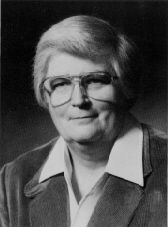 Phyllis A. Beneke dedicated most of her life to the education of the youth of Ohio County.

So interested, so devoted, so concerned was she that, in death, she is continuing to serve the young people through the generosity and foresight evident in her will.

She was nominated for induction into the Wheeling Hall of Fame in the category of philanthropy, thanks largely to her decision to establish a permanent trust find to provide scholarships for Wheeling Park High School students.

However, in her character were other traits which marked her as a woman of vision who was gifted with the ability and drive to inspire fellow educators and the students who whom she felt so responsible.

Phyllis Beneke died in September of 1988. In her will, she stipulated that proceeds from half of an estate of $2.436 million would go toward scholarships for Park High students and that proceeds from the other half would benefit individuals who had meant much to her. Once those beneficiaries pass away, the entire estate will be dedicated to the scholarship fund.

Miss Beneke's generosity had been evident down through the years. In 1966 she donated three stained glass windows to Vance Memorial Presbyterian Church, where she served as a deacon. She regularly contributed to other educational organizations and charities and in her last will gave an extensive collection of Royal Doulton, Royal Copenhagen, and Hummel figurines (and plates) to the Oglebay Mansion Museum.

Born in Wheeling on February 3, 1929, Miss Beneke was a graduate of Triadelphia High School. She obtained her bachelor's degree at Ohio Wesleyan University and her master's from the University of Pittsburgh and did advanced study at the University of North Carolina and West Virginia University.

During her first year as principal of the state's second largest high school, Wheeling Park was chosen as a National School of Excellence.

Phyllis Beneke was named the outstanding principal in the state in 1984 and received a Chamber of Commerce Award as "Outstanding woman in the Ohio Valley" in 1986.

Fellow educators and former students offer impressive testimony to her performance in a leadership role in the schools. As Sue Seibert Farnsworth -- attorney, friend and former student of Miss Beneke -- said, "She truly exemplified the best of educators, the wisest of individuals and the most generous of philanthropists. This valley and this state will long benefit from her generosity."