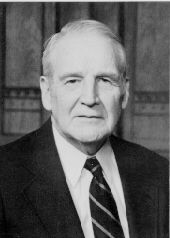 However, it was not only the length of service but the quality of service which "Bud" Seibert rendered on behalf of his constituents that qualifies him for a niche in the Wheeling Hall of Fame.

The bipartisan support he received at the polls from the residents of the county has been recognized for an outstanding job by one of the community's distinguished citizens.

During World War II, Seibert served as a lieutenant in the U.S. Navy.