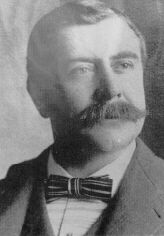 In business with Harry Northwood was his brother, Carl, who was head of sales and also the decorating department. The brothers died within a year of each other — Carl in 1918 and Harry in '19.