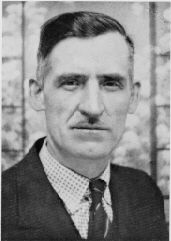 His was a difficult life and it never brought to him quite the recognition it should have — even in the community where he spent most of his days.

But today Sullivan is recognized as a man with a true gift. He is considered one of the outstanding American primitive painters of the 20th Century.

Patrick Sullivan had to paint. The desire and ambition to do so burned deep within him. But his output as an artist was sporadic because he was never able to make a living doing what he loved to do and did so well.

Sullivan's father died when he was two and Patrick spent some years in an orphanage. He and his mother came to Wheeling when he was 16. He worked in the mills, as a playground manager, and as a house-painter.

Back before World War I, Sullivan would paint pictures on cardboards and window blinds — or any other surface through which he could express himself. However, it was not until the enforced idleness of the depression that he had time to apply his laborious technique to the works for which he is now known.

His first original canvas, title "Man's Procrastinating Pastime", was painted in 1936 and mailed to the Society of Independent Artists Show in New York. It attracted the attention of Sidney Janis, a well-known art collector, who bought the painting and encouraged Sullivan to continue.

By the time of his death in 1967, the Wheeling artist was being recognized by art critics for his technique — primitive but rich in personal symbolism.

Sullivan is represented in the collection of the Museum of Modern Art in New York by two paintings. He is in the Britannica Encyclopedia of American Art and illustrations of his paintings can be found in Sidney Janis' "They Taught Themselves", which devotes 23 pages to Sullivan and but 11 to Grandma Moses.

Two of Sullivan's paintings — "Trinity" and "Mansion Museum" — are on display at Oglebay Institute's Mansion Museum.

Only 18 of his paintings are known to exist today.

➤ The Ohio County Public Library Archives holds a small collection about Sullivan's exhihit at the Oglebay Institute in 1979. Click here to learn more.