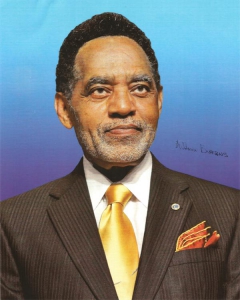 William "Bill" Burrus was born in Wheeling on December 13, 1936. He was a member of the Lincoln High School class of 1954, the school's last graduating class and the last segregated class in the city, before attending West Virginia State College. From 1954-57 he served in the 101st Airborne Division and 4th Armored Tank Division in the United States Army. Upon his discharge in 1958, Burrus joined the United States Postal Service as a distribution clerk in Cleveland, Ohio.

Active in the 1970 postal strike, Burrus quickly rose to prominence in labor union matters, serving on a 1971 committee that merged five labor unions in the American Postal Workers Union (APWU). That same year he was elected director of Education and Research of the Ohio State APWU. The following year he gained national attention in joining the APWU's Human Relations Committee. In 1980, he became national executive vice president of the APWU, the tenth largest union in the country with members in every city in America. He served in that capacity for 21 years, during which time the APWU was recognized as one of the most successful of all American labor unions at earning concessions for its membership.

In 2001, Burrus was elected president of the APWU, receiving 53 percent of votes cast in a three-way contest, thereby becoming the first African American to be elected president of any national union by direct balloting of its membership. His first months in the position were difficult, including testifying before a U.S. Senate committee to demand better working conditions for postal workers after the anthrax attacks that had killed several workers in the months following the September 11, 2001, attacks. Burrus later would advocate for workers' rights amidst the Bush administration's commission on postal service reform. In 2008, he led the APWU to become one of the very first labor unions to endorse the candidacy of Barack Obama for president. He retired in 2010 after a successful 53-year career. He remained active in retirement, authoring an autobiography and a book on black history.

Among his accomplishments, Burrus led union negotiations of four collective bargaining agreements between the APWU and the USPS and was directly involved with every national negotiation between 1980 and 2006. Among his proudest achievements was leading a successful fight to reject a proposed 1978 collective bargaining agreement that would have capped COLA increases — in doing so Burrus protected the economic well-being of generations of postal workers. He likewise helped to create the Postal Employees Relief Fund, which provides financial aid to postal workers who are victims of natural disasters. His tireless work enhanced the rights, safety, and benefit of all APWU employees, who continue today to benefit from his leadership.

William Burrus died on May 19, 2018, survived by his wife Ethelda, four children, and more than 200,000 APWU members who continue to benefit from his half-century of advocacy and service on their behalf.