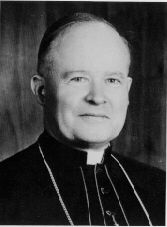 "Bishop Hodges was a man of vision, a wise leader, a deeply prayerful person, a man of dauntless courage, a servant of Christ ever ready to reach out in loving service to others. He knew West Virginia so well. Its history, culture, mountains and valleys were in his heart, in his very blood and at the core of his vision and plans."

That was one of the many eloquent tributes to The Most Rev. Joseph H. Hodges at the time of his death in January of 1985.

Born on Oct. 8, 1911, at Harpers Ferry, he was a graduate of St. Joseph's High School at Martinsburg and the seminary at St. Charles College at Catonsville, Md. He subsequently attended the North American College in Rome for six years and was ordained a priest in Rome in 1935.

Father Hodges served his faith in various capacities in the state of Virginia and was rewarded for his outstanding work in 1952 when Pope Pius XII named him as auxiliary bishop of Richmond. He then served as pastor of Richmond's St. Peter's parish until May of 1961, when Pope John XXIII appointed him coadjutor bishop of the Diocese of Wheeling. Following the death of Archbishop John J. Swint, who is a member of the Wheeling Hall of Fame, Bishop Hodges became bishop of the diocese on Nov. 23, 1962.

A participant in the historic Second Vatican Council from 1962 through '65, he became a strong influence not only in expanding the diocese but in the building of hospitals and schools.

Bishop Hodges was chairman of the board of directors at Wheeling Hospital and in 1984 the hospital's continuous care center was dedicated in his name.

His concern for the sick, aged, and disabled resulted in his receiving doctorate degrees from Wheeling Jesuit College and West Virginia Wesleyan. He was presented the Award of Merit for Distinguished Service in the cause of ecumenical Christianity by the West Virginia Council of Churches in 1975. Later he was to sponsor the first Lutheran-Roman Catholic and Presbyterian-Roman Catholic dialogues in West Virginia.

In 1976, he established Samaritan House in Wheeling as an emergency shelter for boys. He also established a department of special religious education in Wheeling in 1978 and in '80 initiated a women's counseling and referral center in the city. The next year, he built the Pope Paul VI Pastoral Center in Wheeling and in 1982, the Center for Behavioral Counseling and Ministry opened its doors.

Two years later, the Madonna House in Wheeling as opened for unwed mothers and the Rural Life and Retreat Center at Huttonsville was renamed the Bishop Hodges Pastoral Center.

In 1984, Bishop Hodges received the first annual CALC Peace Award, presented on behalf of the National Council of Catholic Bishops and Clergy and Concerned Laity in recognition of the bishop's 1983 peace pastoral.

When stricken with cancer in 1984, Bishop Hodges made no attempt to conceal his disease from press and public but established an example of courage with his gallant fight against its ravages.