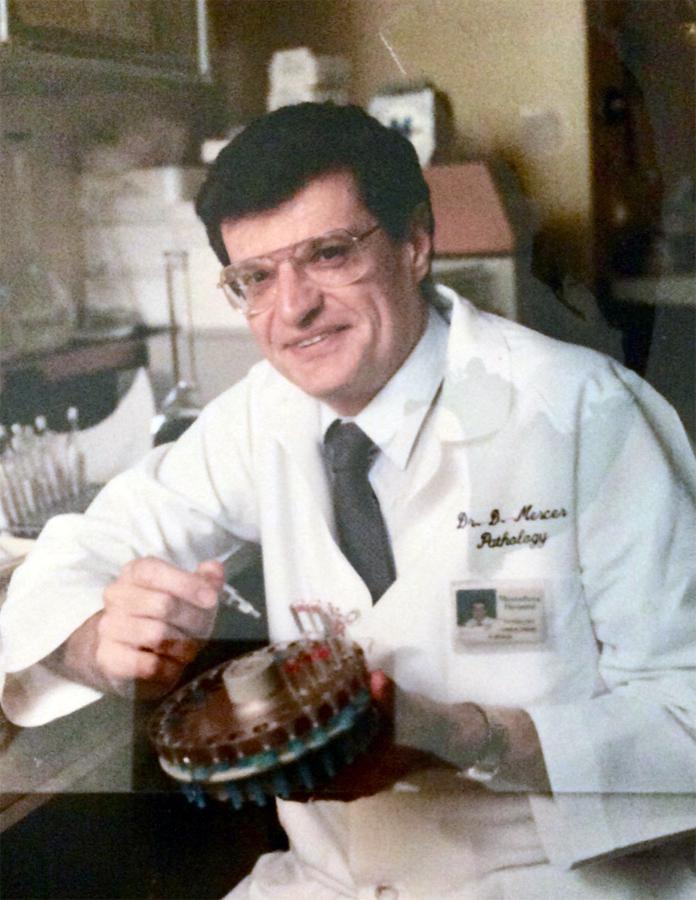 The son of the late Dr. and Mrs. J. Loran Mercer, Donald W. Mercer grew up in Warwood and graduated from Warwood High School in 1956. He received a bachelor of science degree in chemistry from Wheeling College in 1960 as a member of the second graduating class. An outstanding tennis and basketball player, he was elected to the Wheeling Jesuit University Sports Hall of Fame in 1994. The son of a college band director (who was also a Hall of Fame inductee), he played the clarinet and helped establish the WJU symphonic and pep bands. He was named in 2015 to the WJU Hall of Honor and received a WJU Distinguished Alumni Award in 2002. Don married Beth Ann Wolfe in 1961, and they have three sons.

Don was awarded a scholarship to the University of Pittsburgh's Graduate School of Public Health and completed a master of science degree and a Ph.D. degree in biochemistry in 1963 and 1968, respectively. He became the chief biochemist at the pathology department of Montefiore Hospital in Pittsburgh and also held the title of assistant clinical professor at the Pathology Department in the University of Pittsburgh's Medical School. As such, he taught residents and medical technicians, performed research, evaluated new commercial clinical tests, and consulted with physicians and interns. Later, Mercer was promoted to associate clinical professor at University of Pittsburgh's Medical School Pathology Department and worked with the Pittsburgh Cancer Institute as a co-director in research on tumor markers. He also spent five years as the chief biochemist in the Pathology Department of Allegheny General Hospital.

One of Dr. Mercer's research projects included the study of circulating isoenzymes and tumor-associated antigens to monitor tissue activity. At the urging of Dr. Muray A. Varat, Montefiore's chief cardiologist, he began lab experiments to develop a reliable blood test to detect heart attacks. Previous heart tests such as an EKG were considered slow and often inaccurate. In 1975, Mercer introduced a rapid blood enzyme test for the early and precise identification of myocardial infarctions. The "CK-MB test" (cardiac isoenzyme of creatine kinase test) resulted in nearly 100% accuracy and has become the global standard as a fast, accurate, and simple way to detect heart attacks. The test is also used to monitor the degree of heart damage and to detect secondary, smaller heart attacks. Use of the test has significantly shortened a patient's stay in the coronary care unit, thereby reducing hospital and patient costs.

Dr. Mercer published his research results in the Journal of Clinical Chemistry in 1974. News of his pioneering test spread quickly. Mercer was granted a patent in 1977, and Roche Diagnostics marketed the test. During the next few years, he toured the country speaking about his findings and received considerable media coverage and accolades from fellow scientists and medical professionals. He was a regular reviewer for "Clinical Chemistry" and has written numerous articles, book chapters, and abstracts. The 2006 book "Landmark Papers in Clinical Chemistry," published by Elsevier, cites Mercer's work as one of the top 40 developments of the 20th Century. A WJU colleague stated, "My medical practice was significantly influenced by the availability of the CK-MB test. Before this test was available, other unreliable tests were performed. Don's discovery saved lives and decreased the cost of medical care." Dr. Mercer's CK-MB test to this date (four decades later) is still considered the benchmark for detecting heart attacks worldwide.