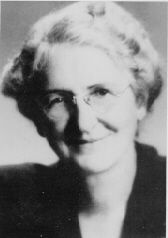 The title of "Patron of the Arts" is far too weak a term to apply to Eleanor Davenport Glass Caldwell, founder of the Wheeling Symphony. Mrs. Caldwell not only supported an art, that of music, but devoted a great organizational energy to perpetuate and promote the playing of classical music in Wheeling and its environs.

Mrs. Caldwell not only played piano, drums, xylophone and cello in the orchestra, but acted as the organization's librarian and in whatever other capacity that was needed.

Her love of music was nurtured not only in her early education in Wheeling schools, but at the Henry C. DeMille School in Pompton, N. J., and the Ogostz School near Philadelphia. She also studied in Europe. In Paris, she was trained in the advanced techniques of the classics. He technical knowledge of music was exceeded only by her love of it.

A backlog of financial support from industrial and civic leaders culminated in the 1952 establishment of a trust by Mrs. Caldwell "for assuring the continuation of a symphony orchestra for the benefit of the residents of the Wheeling district."

Education was an unending delight for Eleanor Caldwell and she served it well. To Wheeling Country Day School, she not only gave a residence on Park Road, but presented the Gibson L. Caldwell Library and continued financial support. A music center and town office building went to West Liberty State College for a downtown center. Today, in 1982, the building, former headquarters of Hazel-Atlas, serves the West Virginia Northern Community College.

While music was her prime interest, Eleanor Caldwell was also active in the Girl Scouts and a charter member of the local council. She was a vigorous campaigner for women's suffrage; served on the Ohio County Public Library Board; and played an excellent game of tennis.

During World War II, she organized and headed the canteen in Wheeling and was active in Civil Defense.

Mrs. Caldwell and other music devotees founded the Thursday Music Club in 1942 with Mrs. Caldwell as chairman for education. This resulted in her meeting with state music educators and supervisors to devise a system whereby music would become a recognized high school course.

She was appointed to the state committee and had a hand in drawing the rules that were shortly adopted as official state policy -- thus a potential source of both musicians and audiences was established for the symphony.

Many activities grew out of this -- all aimed at furthering classical music in the area. Mrs. Caldwell promoted the Symphony Auxiliary to lend continued financial support, established the annual Youth People's Concerts, the Youth Orchestra and the Tri-State Music Association, all aimed at the growth and support of symphonic music ... because she loved it so. That love burned brightly until her death in 1979.