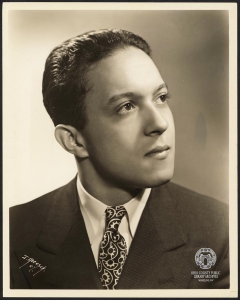 Born in Wheeling on August 31, 1916, Everett Astor Lee was the first-born son of Everett Denver Lee and Mamie May Blue Lee, who lived on Eoff Street in East Wheeling. He is believed to be the first African American to conduct professional grand opera in this country.

After graduating from high school, Lee attended the Cleveland Institute of Music, studying violin. He put himself through school and worked at a hotel, where he met Arthur Rodzinski, conductor of the Cleveland Orchestra. He began attending the Cleveland Orchestra concerts every Saturday and told a reporter in 1948, "My early conducting aspirations were nurtured by him...Rodzinski helped me in many ways; he would go over scores with me and give me pointers."

After graduating from the Cleveland Institute of Music, Lee enlisted in the military. He was sent to Tuskegee to train to be a pilot, but an injury ended his military career. He returned to Cleveland and got a call from a legendary New York producer on Broadway, Billy Rose, who asked him to come to New York and join his orchestra for a production of "Carmen Jones." In the fall of 1943, the story goes that the conductor for a performance was snowed in, and Everett, who was the concertmaster, was handed the baton and told to conduct.

In June of 1943, Lee met Sylvia Olden, a voice coach in the classical music world. They married in early 1944 and had two children, Everett II and Eve. Following their divorce, Lee remarried in 1979. He and Christin had a son, Erik.

In 1944, Lee worked with Leonard Bernstein on an engagement of "On the Town," closing out the show as its conductor. He continued working with Bernstein and went on to become a student at Julliard School of Music as well as at Tanglewood, an extension of Julliard. Following Tanglewood, Lee played first violin for the New York Symphony under Bernstein. Even with prominent connections, opportunities for a black conductor were limited, so in 1947, Lee formed the Cosmopolitan Symphony Society. With limited conducting opportunities, he and his wife both received Fulbright scholarships and left the United State in 1952, studying music in Rome for a year.

The family moved to Germany in 1956 where Lee became the conductor of the Munchener Opernbuhne, a traveling opera company. In 1962, he was appointed conductor of Norrkoping Symphony Orchestra in Sweden, holding that position for 13 years. While Norrkoping remained his permanent residence, Lee conducted the Symphony of the New World in New York, the Bogota Philharmonic in Columbia, and Opera North in Philadelphia.

Lee has been the guest conductor at the symphony orchestras of many cities, including Atlanta, Baltimore, Barcelona, Cincinnati, Cleveland, Detroit, Louisville, Nashville, St. Louis, and Hamburg Germany; the philharmonics of Berlin, Buenos Aires, Lithuania, Madrid, New York, Paris, and Stockholm; the Opera Ebony, and operas in Bordeaux, Munich, and New York City, and Royal Swedish Operas; and the Boston Pops, among others.

Throughout his career, Lee conducted more than 1,000 orchestral, choral, and operatic works. He conducted his last orchestra on January 13, 2005, for the Louisville Orchestra. The City of Wheeling proclaimed August 31, 2017, Lee's 101st birthday, as "Everett Lee Day." Lee currently resides in Sweden and turned 102 in August of 2018.