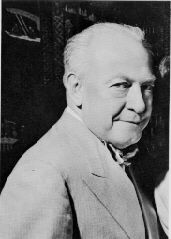 A biography of James H. Kindelberger would trace the history of American aviation - from the wood-and-cloth craft of World War I to the sophisticated Apollo spacecraft that took our astronauts to the moon. Engineer and designer of military and civilian aircraft, this Wheeling native became one of the most influential men in his field. He was a pioneer in the development of nuclear reactors, guided missiles and rockets. His contributions resulted in his induction into the Aviation Hall of Fame and the International Aerospace Hall of Fame.