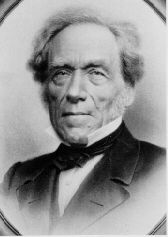 In the spring of 1835, Johann Ludwig Stifel opened a small cleaning and dyeing establishment in a log cabin on North Main St. in Wheeling.

From such tiny beginnings was developed the giant calico works which became the first plant in the nation to print yard-wide indigo blue calico, which was shipped to all parts of the world to be made into clothing.

Johann Stifel, the founder of J.L. Stifel Co., was born in Neuffen, Wurttemberg, Germany, on March 13, 1807. He learned the trade of dyer and calico printer, traveled throughout Europe as a journeyman and later as a foreman in Kaiserlautern.

At the age 26, he emigrated to America. He landed in Baltimore in September of 1833, then moved to Philadelphia and on the Bethlehem, Pa., where he worked in the woolen mills.

In the summer of 1834, poor and alone, Johann Stifel walked from Bethlehem, Pa., to Wheeling. He traveled barefoot part of the time to save wear on his shoes. He became one of the first Germans to settle in Wheeling and in the winter of 1834-35 worked for his board on a local farm.

His North Main St. establishment had a short life because of his desire to return his trade of dyeing and printing of cloth. He purchased a bolt of unbleached cotton goods for $10, dyed and sold it, and purchased a new bolt. Thus he started to develop the capital for the factory which he opened at Ninth and Main Sts., where the Virginia Apartments now stand. Here he dyed and printed cloth by hand and peddled it from a wagon.

On June 18, 1835, he married Barbara Becht, a native German who was then residing in Steubenville. His life flourished and in 1859 his two sons, Louis C. and William F. Stifel, became partners in the growing firm. In 1896, the factory switched to mechanical methods of print.

J. L. Stifel retired in 1874 and died on December 1, 1881. He had developed a business that would prosper for many years. His plant had a daily capacity of many miles of cotton goods and employed several hundred.

Carried on by his heirs, the business was moved to the 400 block on Main St. at the turn of the century.

During both World Wars, the plant converted to war production. In 1943, J. L. Stifel & Sons became the first in the textile industry to win the joint Army-Navy "E" Production Award.

A declining demand for cotton goods, development of synthetic fibers, and foreign imports resulted in the plant being closed in 1957.