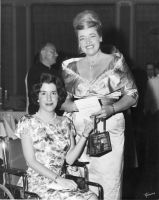 Because of the advocacy of Rosemary Front, the Wheeling area was at the forefront of the movement towards total accessibility for people with disabilities. Her life’s work resulted in a legacy that continues to benefit children with special needs.

She was born in Wheeling in 1940, attended Wheeling Country Day School, and graduated from Triadelphia High School. She received a Bachelor of Science degree from Southern Illinois University, her Master’s Degree from Wayne State University, and an Honorary Doctor of Humanities Degree from Wheeling Jesuit University.

During the years she served the Easter Seals as executive director, Front worked to develop local disability programs into state-of-the-art comprehensive rehabilitative services throughout West Virginia and Eastern Ohio. She served on state, regional, and national boards, including President Reagan’s Architectural and Transportation Barriers Comprehensive Board where she helped to ensure that men and women with disabilities gained the right to open access to places and resources.

Front built a small non-profit charity, Wheeling Society for Crippled Children, consisting of four staff members, into a professional rehabilitation business with more than 55 staff members, implementing programs and services for children with special needs, assuring that indigent care funding was created, and overseeing construction of the rehabilitation facility, housing the Easter Seal Rehabilitation Center, in 1975.

When it came to dedication to Easter Seals, Front possessed the willingness to challenge those who she believed did not know what was best for the local program. When National Easter Seals attempted to claim a large portion of what the local program raised for the benefi t of the National Easter Seals, Front resisted that attempt, believing that the funds raised for the Wheeling entity should remain in Wheeling. As a result, the corporation known as the Society for Crippled Children became the fi nancial arm of the operation with Easter Seals being the operating treatment entity. Therefore, money raised locally was used locally. The Society for Crippled Children’s fi nancial arm continues to receive, through the telecast fundraiser, more than $240,000 annually to be used for operation of the combined facility. Her vision was for the children and families served to have a combined daycare and treatment facility, saving the patients and their relatives the inconvenience and hardship of using two separate facilities.

Front was aggressive in bringing attention to accessibility violations in the area, and she was tenacious when it came to correction of violations. After receiving the Ability Th rough Mobility Award for furthering the cause of helping those with physical disabilities she said she was fortunate to have lived in the United States when she contracted polio because of the accessibility and service available to people with disabilities.

Front was a principled individual, a successful clinical therapist, and an ethical, excellent CEO. Along with all of these virtues she also possessed a keen and cultured mind that attracted volunteers, admirers, and friends from every walk of life. Upon her death in 2009, she was memorialized as someone who “sat taller in her wheelchair than many of us ever stood on two feet.”

Text and pictures provided by Wheeling Hall of Fame. Service provided by the staff of the Ohio County Public Library.