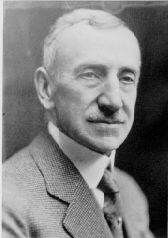 George A. Laughlin left an unusual legacy to the citizens of Ohio County — a legacy to benefit people he never met and one which will benefit those of future generations. This income from a sum considerably in excess of a million dollars is offered annually, in interest-free loans for home financing.

The building was remodeled by Laughlin upon his return to the city from Richmond. He was associated with the chapel for many years and acted as superintendent of the Sunday School and leader of a Bible class. He donated the chapel to the community with Hazel-Atlas securities — valued at $100,000 and to be held in trust and used as needed. Since his death in 1936, it has been known as "Laughlin Memorial Chapel."