The foundry opened in mid-June of 1893 at 18th and Eoff St. The Wheeling Sunday Register reported on June 18, 1893, "The Wheeling Mold and Foundry Company is on in full. New men were put to work last week and more will be given positions to-morrow. The new foundry is giving the best of satisfaction." The ground floor of the building served as the foundry with the second floor housing the machine shop.

The business specialized in the manufacturing of glasshouse molds and machinery and as well as making cast iron castings. Early on, and developed Blue's new methods of molding glass by machine which revolutionized the glass industry. The company's first glass molding machine was used at the Hazel-Atlas Glass Company factory in Washington, PA. in 1895. By September of 1897, the company had built eighteen machines for the Hazel Co., the Beatty-Brady Company, and the Atlas Glass company and was completing another twelve at the foundry. The machine was used in the manufacture of the Mason fruit jar. Blue's patents brought enough success to the company that they were able to open the "Manchester Plant" in 1897.

As capital continued to increase, the company purchased the Peninsula works in 1901. When the Peninsula Foundry opened in 1901, the company's main product was chilled cast iron rolls. The Foundry supplied mill equipment to plants across the nation and beyond. In 1903, the company started on a 60,000-ton tunnel segment for the Pennsylvania Railroad tubes under the Hudson and East rivers in New York City. The Foundry was able to expand its main building and equipment on this contract.

Between 1911 and 1913, Wheeling Mold and Foundry provided so many parts for the Panama Canal that an office of the U.S. Inspection Department of the Canal Commission opened in Wheeling.

All work was transferred to the peninsula site in 1906 until World War I broke out. In 1915, the Manchester site was reopened for a sub-contract under the Bethlehem Steel Co. for the production of small caliber 75-millimeter shells for Russian and French contracts, and in 1917, American 3-inch shells, while the Peninsula plant took on a contract for 100,000 6-inch shells.

Following WWI, the Manchester Plant was used as a small chilled roll foundry. Eventually, it was retired for pattern storage.

The Wheeling Works of Continental produced hull and turret castings for M-4 tanks and gun shields for the Navy during World War II. After the war, the focus was shifted to designing and manufacturing various types of steel mill equipment. Some special projects included wind tunnels and saddles for suspension bridges.

In 1952, during the Korean War, the Wheeling Works made casted and machined turrets for the M-47 and M-48 tanks.

A deed of transfer was registered on November 14, 1955, completing the sale of the Wheeling properties from the Continental Foundry and Machine Co. to the Blaw-Knox Co. of Pittsburgh for $825,000 (effective Nov. 1, 1955). The sale included the properties at the Peninsula and the factory in Warwood. Built in 1922, the Warwood property had first been called the Wheeling Steel Castings Co. and later the Cast Iron Roll Foundry.

By 1960, Blaw-Knox employed over 6,000 people across the country and own ten operating plants: five in the Pittsburgh area, two in Wheeling, and one each in East Chicago, IN, Ellwood City, PA, and Warren, OH.

In 1968, Blaw-Know became a division of White Consolidated Industries and continued to produce mill machinery and hull and turret castings for M-60 tanks. The Warwood plant was closed in 1986 and the Wheeling plant in closed in December of 1993. The grounds of the factory were sold to the Park Corp. real estate company in April of 1994. Demolition of the site took place between 2003 and 2004. 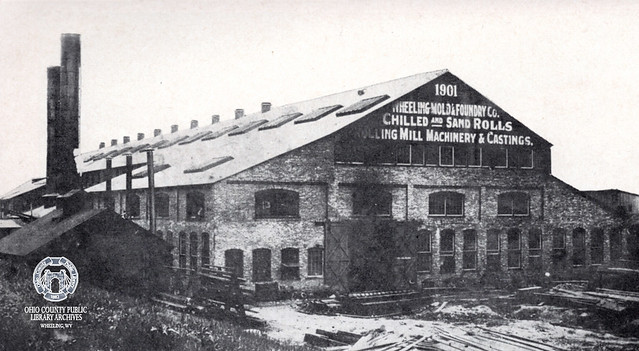 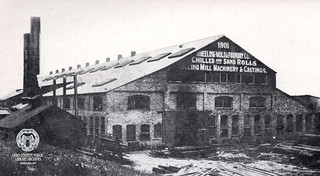 Materials in the Library's Wheeling Room: non-circulating, ask at the Reference Desk for access