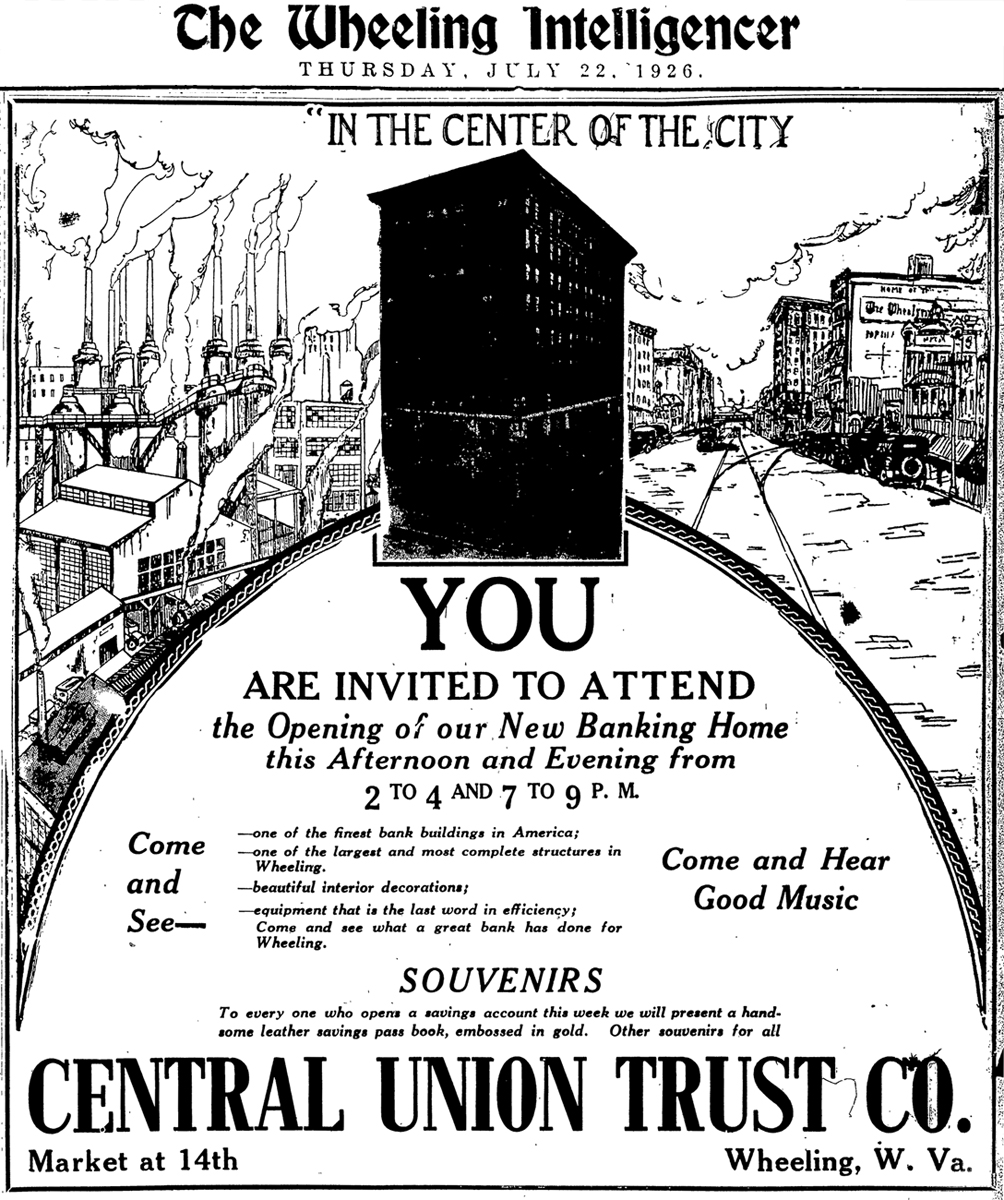 Today the Central Union Trust Company will swing open the impressive doors of its new home at Fourteenth street, the building, a beautiful structure of steel and concrete and massive stone, majestically rises in the heart of the city in splendid testimony to the soundness and stability of a Wheeling banking organization.

The Central Union Trust Company has achieved a record of which it can be justly proud. It is fitting that in the very year which marks a quarter of a century of reliable service to the Wheeling district and the commercial world, the opening of a beautiful new edifice is possible in which to house the ever growing organization Thus, added importance attends the opening today, of the new bank building.

The phenomenal growth of the Central Union Trust Company in the quarter century span of its existence is not the result of ordinary functioning in the banking world. Rather, it is the outgrowth of utmost service and ever willingness on behalf of the officers and directors to extend a helping hand at each opportunity during the past twenty-five years of Wheeling’s progressive development.

Men of Vision at Head

It can be truly said that the men at the helm of the local institution are responsible for the realization of this new monument to success through the conception of a single ideal—to unfailingly serve this district in the best manner of which a well co-ordinated organization is capable. This ideal was constantly cherished, and subsequently inspired unselfish devotion of the bank's heads to the common welfare of the Ohio valley Progress of the Central Union Trust Company has been marked by distinct and almost periodical expansions. The great new building is an impressive symbol of the institution's size and stability—a compelling illustration of the fact that the organization has progressed so steadily and surely that yesterday's vision is overtaken by today's splendid realization.

The bank's new home has been acclaimed as the most up-to-date and modern bank building in this part of the country. From the entrance to the massive vaults every detail of construction has been worked out with chasteness of artistic design and yet the note of great security is suggested throughout. Observation of the huge steel safe in the rear of the main banking room fills one with awe. Its efficiency and strength is said to be second to none in this district. Encased in tons of steel and concrete, it is equipped with a master time clock that operates to the fraction of a second. A complete burglar alarm system is installed ln connection with the safe. The note of security is also apparent in the large safety deposit vault. Everything that makes for the patron's comfort and convenience has been anticipated and provided.

Organization of the Central Union Trust Company occurred on May 6, 1901, under the head of the Quarter Savings Bank. The doors were opened for business the first of July at 1521 Market street. The original capitalization was $25,000. Associates of the institution at that time: James B. Taney, John C. Devine, R. H. McKee, A. H. Wiedenbusch, Thomas J. Ball, N. C. Hamilton, W. C. Eberts and J. B. Handlan. The statement issued at the end of the first banking year, July 1, 1902, indicated deposits at $89,000 and resources at $118,000.

From the very beginning of the business many opportunities presented themselves for individual development on the part of the bank's associates, and it was through the organized endeavors of the institution as a whole that opened the way for expansion. Patronage grew substantially and with consistent rapidity.

J. F. Ebeling, who is the present cashier, was elected to that post in January 1908. At the time he filled this capacity, the deposits were declared as $201,000 and the resources $260,000. Strong appreciation of the facilities offered by this organization was shown by the public to such an extent that it was found feasible to increase the capital of the bank ln 1911. Subsequently, the stockholders voted ln that year for an increase of $75,000, from $25,000 to $100.000.

It was in 1914 that the first, cardinal expansion occurred in July of that year the Central Union Trust company felt the need of more commodious quarters for its business, than were to be had ln the then rather modest home. Consequently, the property of the Pabst Brewing company on the southwest corner of Market and Sixteenth streets was purchased by the growing bank, and the property was cleared of the old Senate saloon, for the erection of a modern bank building which was occupied by the bank from 1914 until its removal to the fine new structure opening to-day!

The comparatively new banking institution continued its steady pace of progress. Each year some additional feature of banking service was added so that in 1920 the capital was again increased, this time from $100,000 to $200,000. It was decided at this time to add a trust department by which to broaden the institution's service to its ever growing list of patrons. The name of the bank was accordingly changed to the "Quarter Savings and Trust company."

When the new banking house was erected in 1914, it was believed by the officers then that the bank had obtained adequate quarters in which to conduct its business, little presuming that in eight years they would be called upon to increase the size of the building to provide a matter of four times the original floor space. This however, is what occurred just eight years later. Adjoining property was secured and the erection of an addition to the building followed.

Now, after twenty-five years of loyal service to its community the Central Union Trust company has achieved the distinction of being an important factor in the growth and development of the Wheeling district.

Fostering a spirit of cooperation in all civic enterprises, this bank has gained for itself the certain reward of substantial recognition from this entire section of the country for its worthy achievements.

J. F. Ebeling, vice president and cashier of the institution, who has been at its head since the time which it was organized, made the following statement:

“The bank, now in its new banking quarters in the new and magnificent bank building, which is in the “Center of Wheeling" at Market and Fourteenth streets, will offer to the general public the most modern and efficient banking service and accommodation that can be had.

"The officers and directors of the Central Union Trust company believe that only through the co-operation of the patrons and customers of the bank and the people of the city of Wheeling and the Wheeling district has this record of achievement been made possible and they take this occasion to announce that the conservative principles which have helped to make such a record possible constitute the policies which will guide its future.