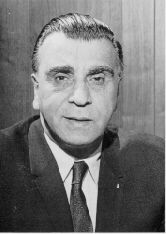 Valan and Mansuetto obtained a franchise in the All-American Basketball Association in 1948 and launched the Wheeling Puritans, who a year later became the Wheeling Blues. The Blues won three league championships as they competed against teams from cities in Pennsylvania, Ohio, and Maryland. The Harlem Globetrotters, Toledo Jeeps, Detroit Eagles, and New York Rens came here for exhibitions.

Because of the efforts of Valan and other members of the organization, Ohio Valley fans saw many players who were to advance to either the National or American Football League. Two ex-Ironmen, Bob Brown and Andy Rice, went from Wheeling to the Green Bay Packers and Kansas City Chiefs, respectively, and played in the first Super Bowl — a year after they were playing on the Island.

Ultimately, the increasing cost of operations brought the financial demise of the Ironmen but not before Valan had also served as president of the CFL. There were many investors in the franchise but no person gave more financially or in time and energy than Mike Valan — high strung, volatile, benevolent, and a human dynamo in behalf of any cause which he took to his heart.

He was twice bereaved — by the death of his first wife, Katherine, in the mid-50's and in 1985 by the death of his wife Irene. He had two sons, John, who now heads the family business, and Michael, who is in medical school at West Virginia University, and is also survived by a sister, Betty Karras.