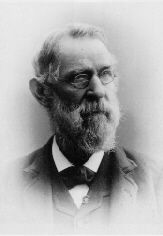 He served as mayor of Wheeling longer than any other man but Andrew J. Sweeney's greatest claim to fame was in the fact that he brought electricity to the city.

By the time Thomas Edison's experiments with the incandescent light bulb bore fruition, arc lighting was already an accepted technology in the United States as the result of the pioneering inventions of Charles F. Brush.

While in Paris, Sweeney saw electric arc lighting in actual service on the city streets. He returned to Wheeling with enthusiasm for this form of illumination and when Brush Electric Co., of Cleveland, formed a local lighting company, Sweeney was named as its president. However, after receiving permission from city council to use the streets and alleys of Wheeling to convey electricity, some of the shareholders in Brush Electric Light Co. of Wheeling became apprehensive and eventually the company was dissolved without ever becoming operational.

However, Sweeney — a man of innovation and foresight — refused to give up. He rekindled the enterprise with the help of his son, John, and W. P. Hix, superintendent of the Sweeney & Son Machine Shop at 12 Twelfth St., where the new organization, the Wheeling Electric Co., set up its first generating plant.

On Sept. 13, 1882, just nine days after Edison lighted lower Manhattan, Sweeney provided electric lighting in actual service for the first time in four business establishments in Wheeling. The cost was 75 cents per night for each light, with the charge including installation of the lamps.

Born in Pittsburgh, Jan. 1, 1829, the son of Irish immigrants, Sweeney was brought to Wheeling by his father, Thomas, a year later. The elder Sweeney acquired the properties of North Wheeling Manufacturing Co. and as A. J. Sweeney grew up, he worked in the family business, which produced engines, mill machinery, foundry castings, and steamboats. He took over control of the enterprise in 1875.

Sweeney was first appointed mayor in 1855 and served until 1881. In addition to being head of municipal government, he served as colonel of the militia during the Civil War.

Mayor Sweeney was one of the incorporators and a director of the Citizens Railway Co. and was instrumental in organizing the paid fire department and fire alarm telegraph system.

Sweeney fathered 13 children. He was married in 1848 to Mary H. Moore and they had four children before she died at age 30. In 1861, he married Marie E. Hanna, of Washington, Pa., by whom he had nine children.

Sweeney died in his North Main St. home on the night of Valentine's Day, Feb. 14, 1893. He remained head of Wheeling Electrical Co. until his death.