“Work wins” Augustus Pollack once wrote, a simple, two-word motto that came to define the Wheeling businessman’s life and career.

Augustus Pollack was born in Germany on July 5, 1830 to a reasonably well-to-do farming family. Augustuswas educated at Buende College and apprenticed at a large commercial house until political upheaval and the prospect of military conscription prompted the 18-year-old to immigrate to the United States. He first settled in Baltimore, establishing a notions and fancy goods business, which he moved to Wheeling in 1854. Pollack married Rosalie Weinberg of Baltimore in 1855 (they had one son and six daughters) and established another business in Graft on in 1858. Pollack moved to Wheeling permanently in 1860 and lived with his family above his Main Street business. He resided in Wheeling for the next 46 years until his death on April 23, 1906.

Pollack served on the board of education and as an elector on Republican Benjamin Harrison’s presidentialticket. A devoted Unionist during the Civil War, Pollack allowed the U.S. military to use his Graft on buildings without charge for the war eff ort, prompting a letter of gratitude from Secretary of War Simon Cameron. Pollack helped establish a German American volunteer company, and helped bring the Pittsburgh, Cincinnati & St. Louis Railroad into Wheeling.

A German Jew, Pollack was an active member of Wheeling’s German immigrant community, helping to establish a German language newspaper, “The Patriot,” and serving for a time as president of both the German Bank and German Fire Insurance Companies. Pollack was named honorary president of the 1885 Saengerfest, a large German singing festival and, in 1870, helped raise money for the widows and orphans of German soldiers killed in war. Pollack also served as Director of the Linsly Institute as well as trustee of the Female College and was a generous patron of the arts, particularly classical music.

Pollack founded his signature business, Crown Stogies, on Water Street in East Wheeling in 1871. In just 15 years, Crown Stogies grew to become West Virginia’s largest cigar manufacturer. At their peak, his two factories employed more than 500 people. When built, his factory spanning 18th and 19th Streets from Chapline to Eoff was one of the largest cigar factories in the world. In his 1906 obituary, the Wheeling News-Register declared that no one deserved “more credit for the Wheeling stogie’s prestige.”

Known to work 16-hour days at his office on Water Street, Pollack did not ask more of his employees than he did of himself. He paid them well and maintained an open door policy regarding employee concerns over work conditions, hours, wages — an unusually progressive attitude for a nineteenth century entrepreneur. Thus, while his contemporaries in steel and coal faced regular and often violent labor struggles, Pollack’s employees remained comparatively loyal and content. His policies influenced other local stogie manufacturers, rendering stogie-making Wheeling’s most desirable career choice for the working class.

Pollack’s employees and their local union brethren publicly demonstrated their affection for him in an unprecedented manner. After he died on April 23, 1906, local labor unions, led by the Garfield Assembly of International Stogie Makers, collected donations from their membership to erect a large monument in Pollack’s honor. Depicting a handshake between employee and the employer, the monument was placed in a prominent position on the grounds of Wheeling’s city building. It was later moved to its current home on Main Street near the Fort Henry Bridge on-ramp. [Note: It has since been moved to Heritage Port.]

The inscription reads: “ERECTED BY TRADE UNION MEMBERS OF UNITED STATES IN MEMORY OF AUGUSTUS POLLACK WHOSE BUSINESS LIFE AND ACTIONS ALWAYS IN SYMPATHY WITH ORGANIZED LABOR.” The Pollack monument is thought to be the only memorial ever built by labor in honor of a business owner. 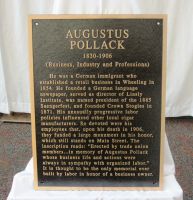