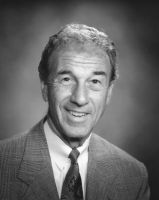 Scientist, educator, wellness advocate, and community booster, Clyde D. Campbell attended Ritchie and Webster schools before he graduated from Warwood High School in 1948. He earned undergraduate degrees (BS and AB) in chemistry from West Liberty State College, where his classmates honored him with the distinction of Mr. Hilltopper, the student body’s most prestigious award. He received advanced degrees from North Carolina State (MS) and West Virginia University (PhD) in biological and organic chemistry.

In the early 1960s he worked at Mobay Chemical as Senior Research Chemist, and, in 1967, he returned to West Liberty as chair of the School of Natural Sciences. Subsequently, he held the posts of dean of administration and academics, and from 1984 to 1995, he served as West Liberty’s president. In the 1999-2000 academic year, he was interim president of Jefferson Community College and created its development office.

Dr. Campbell is a member of various scientific societies, including the American Chemical Society and the West Virginia Academy of Science, and chaired the advisory board of the Northern Regional Consortium for Science, Mathematics, and Technology. He holds 31 national and foreign patents, most involving research in plastics, plant pigments, and ruminant metabolism. He continues to work on synthetic livestock feeds as one solution to ending world hunger.

His commitment to education manifested itself in his service on the Ohio County Board of Education in the late 1960s, when he also served as its president. During his tenure on that board, Ohio County took its first steps to modernization of its physical facilities and the consolidation of its high schools, reforms that were realized in the mid 1970s.

During the late 1970s, he became an advocate and spokesperson for wellness, especially heart health. For a decade he chaired the Ohio County Heart Association, during which time the organization was recognized by the national association for its outstanding service to the community. As college president, he spearheaded the move to establish and to accredit a baccalaureate degree in nursing and, under his leadership, the school’s programs in medical technology and dental hygiene were enhanced and updated. All of these programs now are housed in Campbell Hall, the newest building on the West Liberty University campus.

A scientist of the first rank, Dr. Campbell also is a man of deep religious faith: for 56 years he taught the adult Sunday school class at Warwood’s United Methodist Church, and, on more than 100 occasions, he served as a guest pastor in area Presbyterian and Methodist churches.

Part of Dr. Campbell’s service to his community, known and admired by his closest friends and colleagues, is not so well known publicly: he has served as mentor, advisor, and confidant for many young people, and those folks now are orthodontists, doctors, teachers, patent-holding scientists, and civic and political leaders.

Dr. Campbell is married to the former Joan Luhan, a West Liberty alumna and former fourth grade teacher at Warwood Elementary. The couple has one adult daughter, Leslie Ann, and three grandchildren. Love for family and his faith are the only things he holds more valuable than his devotion to public service.