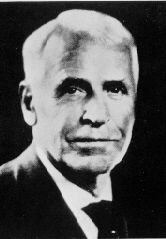 From a 13-year-old bellboy at Wheeling's McLure House to a business giant and multimillionaire. That's the success story of Ellsworth Milton Statler, who virtually without benefit of formal education climbed to the pinnacle of the hotel business.

In 1950 he was proclaimed by his industry as the person who had contributed most to the science of inn-keeping and was hailed as "the hotel man of the half-century."

Statler was born in Somerset County, Pa., on Oct. 26, 1863, but his family moved from a farm near Gettysburg to Bridgeport, Ohio, some six years later. At age nine, Ellsworth lugged buckets of coal in a Bridgeport glass factory. Four years later, he crossed the bridge to Wheeling's leading hotel, The McLure, to work as night-time bellboy.

The hotel business fascinated Statler. At 15, he was head bellboy, then clerk. By the time he was 16, he could handle the hotel books. At 19 he was the untitled manager.

Enterprising and innovative, he leased the McLure billiard room and made it a profitable venture. He set up a railroad ticket booth which was the first transportation department in a U. S. Hotel. He bought out a company that had been operating the Musee Bowling Lanes. He also opened a lunchroom, "The Pie House," in the Musee building and his mother and sister were soon baking there.

Statler's dream was to have his own hotel and in 1907, that dream became a reality. He opened the Buffalo, N. Y., Statler and offered "a room and a bath for a dollar and a half." He proceeded to establish a chain of middle-class hotels which set standards for comfort and cleanliness at moderate prices.

Seeking a competitive edge, he designed a plumbing shaft that permitted bathrooms to be built back to back, providing two baths for little more than the price of one, and allowing him to offer many private rooms with adjoining baths.

He became the first to put telephones and radios in every guest room, along with full-length mirrors, built-in closets, and a special faucet for ice water.

Eventually, Statler opened hotels in Boston, Cleveland, Detroit, and New York. Emphasizing that "the guest is always right," he demanded top performance from employees but was also caring about their needs. His program of job and retirement security was unique in its time.

Following his death in 1928, Pittsburgh and Washington hotels were added to the empire. After 1950, Los Angeles, Hartford, and Dallas Statlers were built.

On Oct. 27, 1954, the chain was purchased by Conrad Hilton for $111,000,000, the largest transaction in the history of the hotel industry, and, at that time, the largest real estate transaction ever.

Statler's own formal schooling ended with the second grade but he valued education. The terms of his will established the Statler Foundation. The major beneficiary is the School of Hotel Administration at Cornell University, Ithaca, N. Y., but large grants have gone to other colleges and universities.