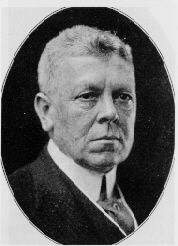 In 1936, at a meeting of Oglebay Institute, Wilbur E. Stone was hailed as "Wheeling's First Citizen."

It was an honor he was accorded "in appreciation of a long life of generous devotion to our industrial, social and civic work."

Born in Wheeling on December 29, 1863, he was educated both in the public schools and at Linsly Institute. His business career began when he became associated with the mercantile establishment that still bears the name of his father, Elijah Stone, and uncle, Jacob Thomas, and which eventually became West Virginia's largest department store chain.

Following the death of the founders in 1898, Wilbur Stone became head of Stone & Thomas, which had been opened in 1847 with floor space no larger than the standard-sized living room of today and with the combined capital of $1,500. He began a program of expansion that established policies and formulated merchandising systems that advanced the growth and prosperity of the organization.

Stone was also behind the formation of the Ohio Valley Industrial Corp. for the development of new industries and extension of employment.

However, his best-remembered legacy to the city came in 1924 when he contributed $100,000 in a challenge grant toward the purchase of Wheeling Park, which had been a privately owned amusement-recreation park but which was being sought by investors for subdivision for residential purposes. The park could have been lost forever to the community if Stone, Otto Schenk and others had not stepped in to procure the property.

Stone's offer sparked a drive in which 170 pledges were made to secure the rest of the money — about $175,000 — to buy the park property. Moreover, he proposed the formation of an independent Wheeling Park Commission, which came into being in '25 and had been functioning on behalf of the community ever since.

In 1936, Stone donated $52,000 for a new swimming pool at Wheeling Park. He also paid for the beautification along U. S. Route 40 and the Chapline St. extension. He later set up a trust of $100,000, with the income to be used for public beautification.

Stone worked unflaggingly in behalf of the Wheeling Park Commission until his death on Jan. 28, 1938. He was also a patron of education and contributed $25,000 toward the Linsly Building at Thedah Place. He was a contributor to the maintenance of the West Virginia Home for Aged Women and gave his time and money to support the YMCA and for the erection of the association home.

He was president of Security National Bank and a life member of Thomson M. E. Church.