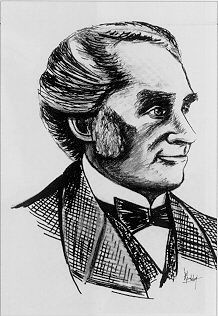 Noah Linsly, a Connecticut Yankee who traveled to West Virginia to practice law, died in 1814 but his name still lives, thanks to the school which his money made possible.

Perhaps the epitaph on his tombstone in Mt. Wood Cemetery describes him best -- "A Friend of Youth and a Benefactor of Mankind."

He came as a stranger to Wheeling in 1799 — just four years after the community received its charter from the state of Virginia — but in the brief span he spent in the community, he established himself as one of its leading citizens. He served as a member of council, prosecuting attorney, and mayor. When he succumbed on March 25, 1814, at the age of 41, his will provided that all of his property, with the exception of a gift of $3,000 to the Yale University Library, be used "for the use, benefit and advantage of a Lancastrian School" in Wheeling.

In his will, Noah Linsly made a bequest of two farms he owned in Ohio County to Noah Zane and Samuel Sprigg as trustees to found a school for boys on the Lancastrian principle, whereby older boys are trained and in turn serve as tutors to younger boys.

With the money from the sale of the farms, a lot was purchased extending from Market St. to Chapline St. along Alley 11. It is the property now occupied by the Victoria Theatre Building and that of the Bache brokerage firm.

Later, the school, Linsly Institute, moved to a building on the northwest corner of Fifteenth and Eoff Sts., where later was located the first capitol building of the state of West Virginia.

About 1928, Linsly moved to Thedah Place and just a few years ago was transplanted to its fourth home, located between Leatherwood and Knox Lanes.

The act of incorporation was passed by the assembly of Virginia on Nov. 29, 1814. By this act, the management of the school was placed in the hands of a Board of Trustees, which was to be a self-perpetuating body, empowered to hold and administer the property of the institution, to make laws for its government and to choose the teachers.

The son of Josiah and Rachel Linsly, Noah Linsly was born at Branford, Conn., on Jan. 26, 1774. He was a graduate of Litchfield Law School and received his B. A. from Yale in 1791.

In 1803, he was invited to the office of tutor at Williams College, then recently incorporated. That appointment was undoubtedly due to the impression he had made upon Williams President Ebenezer Fitch, who had been on the faculty at Yale but left in 1791for the academy which grew into Williams College.

After a year at Williams, Linsly became an instructor at Yale. His success and his scholarship were recognized in 1795 when both Williams and Yale conferred on him the degree of Master of Arts.

In 1797, Linsly moved to Morgantown, W. Va., and entered into the practice of law. Two years later, he settled in Wheeling. That was indeed a fortunate day for Wheeling as he tried to give his adopted city the noblest secular benefaction that can be conferred — the benefaction of learning.