-from the Wheeling Daily Intelligencer, various dates, October and November, 1918. 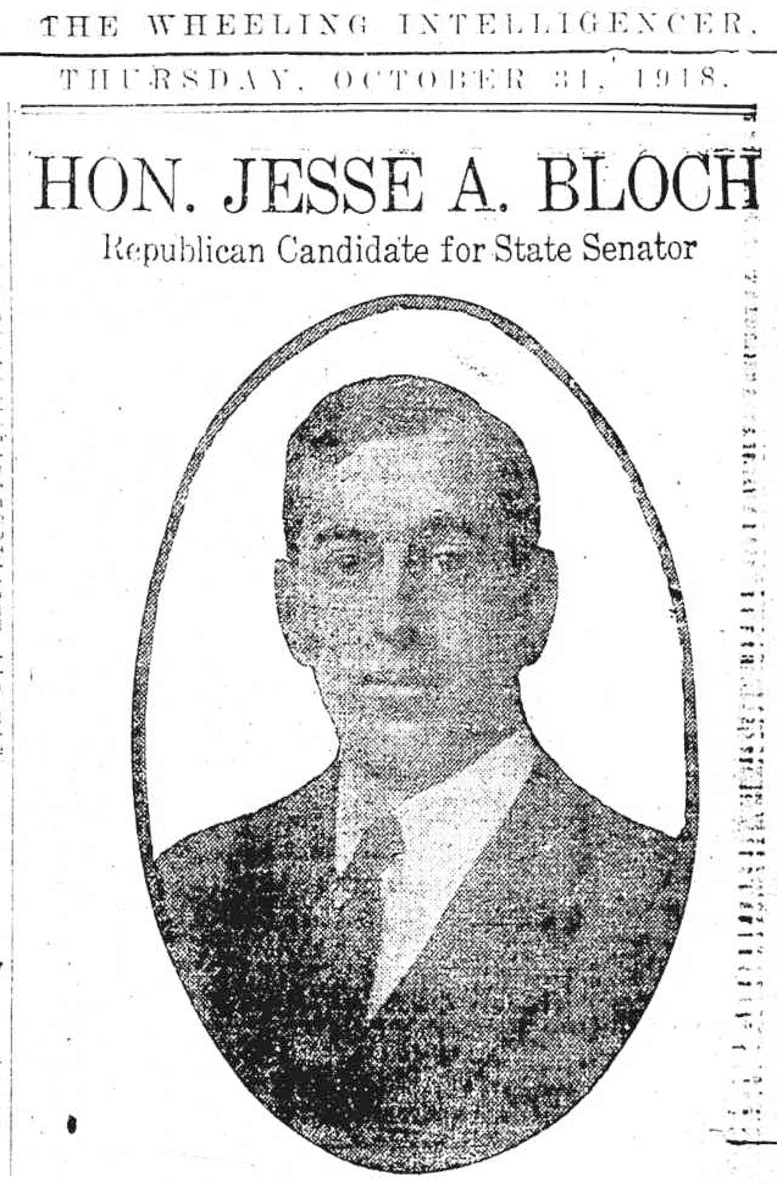 Hon Jesse A. Bloch, whose cut appears above, has served two terms In the House of Delegates as a representative from Ohio county. In 1912, Mr. Bloch was a candidate for nomination in a heated primary and led the field of eight candidates. He was also high man in the following election.

In the legislative session of 1913, Mr. Bloch introduced and sponsored the first workmen's compensation law over passed in West Virginia. A large employer of labor himself, and a man of wide business experience, and progressive ideas, he recognized that the old method of compensating injured workmen was entirely inadequate and often cruelly unjust. He gave much time and thought to the subject of workmen's compensations and prepared and introduced into the house the first measure enacted into law in the state. It was largely due to Mr. Broch's example and influence that the objections of many employers to the law were finally overcome.

In the session of 1915 Mr. Bloch framed and introduced most of the important amendments to the working man's compensation law, which experience had shown to be necessary. In furthering these amendments, he met most vigorous opposition from certain interests and Mr. Bloch led most ably In the House of Delegates the fight for their adoption.

It is not too much to say that to Mr. Bloch more than any other man, the workinmen's compensation law in the state is to be credited. Mr. Bloch has continued the study of' the subject and few men in the state today are so well informed as to the operations of this important law.

In the House of Delegates, Mr. Bloch also supported the bill creating the Public Utility commission, the court, which today regulates the operations and charges of the street car, electric light, railway, gas and like companies, measure which is in every respect, one of the most important that ever passed a West Virginia legislature.

Mr. Bloch also strongly supported and with Dr. J. J. Allen, of the county, fathered the appropriation for the West liberty Normal dormitory building; and it, as a matter of record, that only the strong representatives made by these gentlemen to Governor Hatfield prevented a veto of this feature of the appropriation, at a time when the state was sorely in need of revenue.

Mr. Bloch also originated and pushed successful the proposition to give county aid to local hospitals. As a manufacturer and employer of labor, as an important businessman concerned with the interests of the highest personal character, Mr. Bloch is ideally fitted for public service and will make a splendid State Senator.

Mr. Bloch's candidacy for the State Senate has been strongly endorsed by hundreds of representatives, business men and working men, and by none more strongly than the organization of his own employes, and organizations which testified in the strongest possible language to Mr. Bloch's uniform fairness as an employer, and constant consideration for the welfare of the workers associated with him.