Glass Industry in Wheeling in 1886

A MARVELOUS ARRAY OF WORKS

In the Vicinity — Producing Glass of all Kinds, Shapes and Colors, for all Uses.
The Growth of the Glass Industry for its Earliest Introduction.

Around Wheeling has grown up in the past generation a glass production industry which rivals in importance and extent any other branch of manufacture in the Ohio Valley. Wheeling herself has three glass houses, with a total of seven furnaces and over eighty pots. These three factories give employment to nearly 1,500 men in various branches of their work, and probably support of the city's population. In addition to these, one of the Wheeling companies owns and operates a factory on the Ohio side of the river. Another that side is operated and largely owned by Wheeling men, still another is almost entirely managed and partially owned by men residing in the city and ot the eighteen glass houses in the Wheeling district, exclusive of this city and Steubenville, more than half, in addition to those already referred to, are largely represented in their stockholders and official boards by Wheeling people.

BEGINNING OF THE INDUSTRY

The glass making industry dates its origin in this city back nearly two generations. As long ago as fifty years, the South Wheeling works were established, and several years after were purchased by Messrs. Hobbs & Barnes. As early as 1834 Martin's Ferry had a glass factory. The predecessors of the present Central Company began operations in 1863. The North Wheeling Glass Works was originally a window glass factory, but has been in operation more than a decade as a bottle works. The leading product of Wheeling in late years, however, has been pressed table ware, and the industry in its present development may be said to have started in the active season during the sixties. At the Centennial exposition at Philadelphia in 1876 the first piece of glassware ever pressed was a part of the fine exhibit of Hobbs, Brockunier & Co., of this city. The first glass made on this continent was made in 1608 in Virginia and the first manufactured article ever exported was this glass, which was sent back to England. At that time the art of glass making was but imperfectly practiced in England. In 1815 a glass works was established in Wellsburg. In 1820 this works made $20,000 worth of ware. Eastern Virginia had ceased to manufacture glass before this Wellsburg works was started. In 1831 there were two factories at Wellsburg and one, having six pots, in Wheeling, besides two window glass works in this city. In 1840 Wheeling had three glass houses and Wellsburg but one.

As exactly as can be ascertained, the first glass works in Wheeling was a window glass factory built in 1821. In 1829 John and Craig Ritchie built a cut glass factory on the side of the hill in what is now the Second ward. This factory won a wide reputation. As early as 1835 the advantages of Wheeling in the way of cheap fuel and transportation became apparent , and the Messrs. Sweeney built a large flint glass house in the north end of town. A few years later Plunkett & Miller built the factory which afterwards became the South Wheeling works. Messrs. J. L. Hobbs and J. H. Hobbs, father and son, became identified with these works in 1845, and the latter has been uninterruptedly connected with the concern since. In 1864, Mr. Wm Leighton, jr., of this factory made an improvement in the composition of lime glass which had an important effect on the making of glass the world over. Prior to that time lime glass had been abandoned or relegated to inferior grades of goods, but Mr. Leighton's discovery rendered it again available for the finest classes of glassware. It was cheaper than flint glass, and its equal. It has the advantage of less weight. Thus to Wheeling, which has made such innovations in the iron and nail industries, must also be given the credit of a decided improvement in glass.

The glass trade is possibly of as much benefit to the city in general as any other one branch of manufacture. The wares turned out by her factories are excelled nowhere in excellence of quality, beauty of design of brilliance of hue. Her manufacturers long ago took the lead in the business, and have never fallen behind. New ideas in processes and product have been introduced, and the Wheeling glass ware rivals in many respects the costliest brought from abroad: The city is thus celebrated far and wide, for her glass goes not only all over this continent and to Cuba, but is sold even in Europe, under the shadow of the factories which were engaged in making glass when America was discovered.

At certain seasons of the year leading jobbers and users of glassware from every city of commercial importance in the country come to Wheeling to visit the factories of the of the vicinity, inspect the goods in their warehouses, and lay in their stocks for the season. The methods of the trade are unique, and have grown with the growth of the industry.

The daily average of wages here exceeds that of other glass making points. The number of employes engaged in the business in Wheeling compose 4 percent of those of the country. The production of her factories is valued at 7.82 percent of of the value of the entire glass product of the United States. West Virginia, among the lowest states in population in the country, is the ninth in her glass production. In this as in other industries, however, no line can be drawn between the industry in Wheeling and that in the neighboring towns. They are one in interest, one in results, almost one in reality. 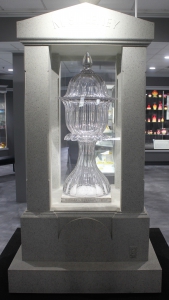 Four Sweeney brothers formed the Sweeney and Co. Glass Works in 1835.  Two brothers, Robert and Campbell, died before Thomas Sweeney designed his famous punch bowl in 1844.  There are several stories associated with this bowl, many fictional.

The most up-to-date research indicates that one or two very large cut glass vases or “punch bowls” were made.  These vases are reputed to be the largest pieces of cut glass ever produced!

The huge bowls consisted of five pieces, each one being blown into wooden molds and then cut.

These Sweeney vessels were exhibited in New York and in Philadelphia where they won several medals.  The Sweeney’s hoped to display one of the bowls at the Crystal Palace exhibition of 1851 in London.  Unfortunately, as it was being packed, their factory was destroyed by fire and the project was abandoned.

The Sweeney Bowl on display at the Oglebay Institute Glass Museum appeared on Michael Sweeney’s grave when he died in 1875.  Michael and his brother, Thomas, had been partners when the punch bowl was made.  They later separated because Thomas refused Michael a loan.  The story goes that they never spoke to each other again.  When Thomas visited his estranged brother’s grave and saw the bowl, accompanied by an inscription claiming that Michael alone had manufactured it, he was speechless.

In 1949, the bowl was removed from Michael’s grave for safekeeping and is now on display here.  The granite monument that housed the bowl, minus its glass walls, can still be seen at Greenwood Cemetery in Wheeling.

Stories persist about a second punch bowl made by the Sweeneys, about the same size as the one on display at Oglebay Institute Glass Museum.  Reportedly, in 1852, one Sweeney Punch Bowl was on display at the National Institute in Washington D.C. (later absorbed by the Smithsonian Institution).  Whether this was the same bowl that Oglebay Institute now displays, or another, is not known.  The Smithsonian has no record of a bowl such as this in their collection.

The Sweeney brothers also made a smaller glass bowl, reported to be three feet, six inches in height, for Kentucky statesman, Henry Clay.  Thomas Sweeney greatly admired Mr. Clay, who had been partly responsible for having the National Road pass through Wheeling, greatly increasing the importance of the city.  This vessel held seven gallons and was used by Mr. Clay’s family in Ashland, Kentucky as a “baptismal font”.  The bowl broke in two when water and flowers were placed in it for a 1916 reception held by a Clay descendent.  The pieces were stored in the attic of a house that was destroyed by fire in 1930.